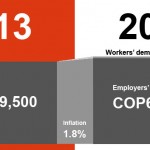 Negotiators representing Colombia’s businesses and workers failed to reach a consensus at a meeting Monday over the minimum wage increase for 2014.

While the business lobby increased their offer slightly from a proposed 3.8% to a 4% raise, workers’ unions remained set on their call for a 6% raise.

“The business lobby will not renegotiate the increase of the minimum wage,” said president of the Trade Board and Agricultural Society of Colombia Rafeal Mejia.

According to economic magazine Portfolio, workers remained confident that the business lobby would reconsider their offer by Wednesday’s next meeting.

The business lobby said  they were “leaving the ball in the court” of the government and worker’s unions to analyze their proposal.

If business lobbyist and workers’ unions fail to reach a consensus at next Wednesday’s meeting, the decision will be made by the government’s Ministry of Labor before December 31, 2013.