Will Colombia’s Gamble On Medical Tourism Pay Off? 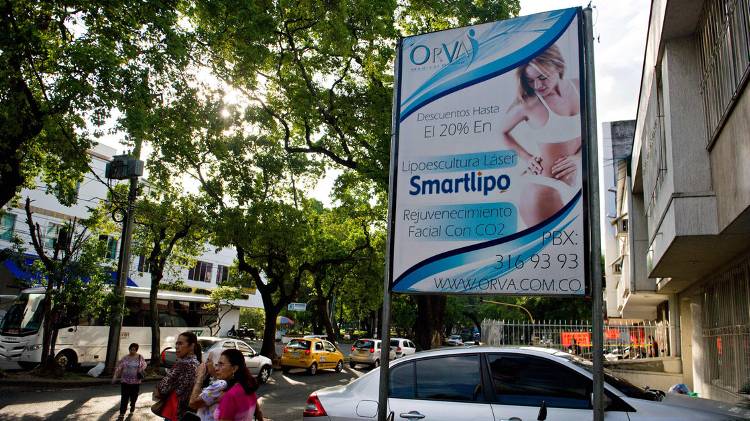 A billboard announces discounts on cosmetic treatments in a street of Cali, Colombia. In recent years the country has been building facilities specifically designed for medical tourists.

By Andrew Fishman (Parallels) International medical tourism is big business worldwide. Countries like Costa Rica, India and Thailand lead the way as top destinations for people looking for high quality care at a fraction of the cost back home.

Lately, countries closer to the U.S. are also trying to break into the market — such as Colombia — which until recently was better known for drug trafficking than nose jobs.

Not long ago, when the global economy was booming, analysts were saying Americans were pouring out of the country for medical procedures. One projection said the number would reach almost 11 million annually by 2013.

Colombia, which was seeing huge improvements in safety and tourism, decided they wanted in on the action. Since then, they’ve been building facilities specifically designed for medical tourists.

San Vicente de Rionegro is a new hospital, less than two years old. It sits on a country road in the lush, green hills outside downtown Medellin. The middle of nowhere, really, except that it’s only a few minutes drive from the city’s international airport — perfect for international patients.

The facility is massive, but San Vicente only focuses on six surgical specialties ranging from organ transplants to cosmetic procedures, all of which are popular with medical tourists.

“If you want to be one of the best hospitals in the world, you have to start with a facility like this one,” says Dr. Sergio Franco, the head of cardiovascular surgery at San Vicente.

Franco says foreign patients come here to get the same quality services that they’d find in the U.S., but with a more caring approach and at a fraction of the cost.

Those savings also attracted Jeff Daniels to Colombia. He’s a Brooklynite in need of some serious dental work not covered by his insurance.

“I’m getting a dental implant and several crowns; I got two root canals,” Daniels says. This is his second trip to Medellin in a month and he’ll be back a few more times before he’s through.

On his first trip, Daniels says he was nervous. He doesn’t speak Spanish and he’d heard about drug cartels and crime, not to mention the ongoing internal conflict that’s killed hundreds of thousands of people — mostly civilians.

“I expected it to be kind of like a warzone,” he says. “Just the opposite was true. I find it to be no more dangerous than New York.”

That is exactly the message that Colombia wants to get across. They’ve handed out big tax breaks and have pumped millions into ad campaigns.

As a result, tourism is way up, and medical tourism is growing too. New hospitals and clinics are popping up all over the country, usually with affiliations to big-name hospitals in the U.S. A new facility in Cartagena just broke ground a few months ago. They’re even going to have a beach resort right there for patients’ families.

But the numbers aren’t as promising as the analysts projected back in 2008.

“From what I’ve been looking at, less than 20,000 people a year. This is not millions of people,” says K. Eckland, an American nurse who has interviewed hundreds of surgeons in Colombia and written three guide books on medical tourism.

Eckland thinks the option to go abroad for people without health insurance can save the lives, but she’s also worried about the cost to Colombians.

“When you attract your top surgeons to an exclusive destination tourist facility, you have them there and the people who come to that facility will get it,” she says, “but you’ve also robbed everybody else of the opportunity to be treated by the best and the brightest.”

Nonetheless, these types of projects keep moving forward in Colombia. And, at least for now, there’s no telling if their bets will pay off.

The post Will Colombia’s Gamble On Medical Tourism Pay Off? appeared first on Colombia News | QColombia.com.