Will Colombia’s Farmers Get What They Want? 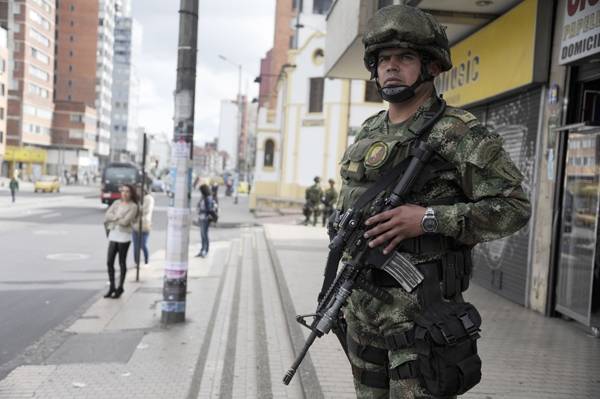 By Paula Mejia – This summer, I traveled to Bogota to visit my extended family. I spent five peaceful days driving around the capital city – slate-colored, chilly, surrounded by mountains. Nothing I saw suggested the uprising that was about to erupt.

On August 19th, a few days after I returned to New York, an estimated 200,000 farmers, truckers and miners blocked every major road leading in and out of several major Colombian cities, including Bogota. Demanding rights for Colombia’s agricultural workers, the protesters used anything available to them – rocks, branches, debris – to block civilians from entering or leaving cities. In Bogota, what had begun with peaceful protests to support the farmers’ demands quickly turned into riots. For the first time in 20 years, troops were deployed in the capital. Over 650 were arrested, 485 were reported injured, 12 were killed and 600 cases of human rights violations were reported as a consequence of the riots. On top of that, an estimated four million people have been displaced by the conflict.

I have been visiting Colombia with my parents since I was a baby, but I have never yet witnessed anything like this. The conflict with FARC’s guerilla army, which has been raging for decades, has always seemed far away, in the nation’s remote western reaches. When I heard what was happening in Bogota, I called my aunt Catalina Mejia, a professor of art at the capital city’s Universidad de los Andes. The strikes, she explained, began with claims that the nation’s new minister of agriculture had failed to meet certain basic necessities – including a lack of fiscal attention to the agricultural sector, whose poverty level is double that of Colombia’s major cities. The farmers swore that agricultural production would halt until these demands were met; the Colombian government, in response, refused to comply unless and until the strike was lifted and roads were cleared. On September 7th, after nearly three weeks, farmers ended the strike on the condition that the government would agree to draft a plan for mass coverage of agricultural insurance. Two months later, the promised insurance is yet to be seen. “Everyone supports the farmers,” says my aunt. “It’s an outright injustice.”

Tensions have been rising between the Colombian government and the agricultural sector since the regulations imposed by the U.S.-Colombia Free Trade Agreement, which went into effect in May 2012. The agreement aimed to promote economic growth in both nations by phasing out tariffs and removing other barriers to trade between the two nations. But farmers have bristled at the requirement that they use genetically modified seeds, engineered by international conglomerates like Monsanto and Du Pont, and pay an annual fee to do so. They complain that the GMO seeds aren’t suited to Colombia’s highly varied climate, that using them poses a threat to native seeds’ natural biodiversity, and that they come with serious health risks. (Monsanto insists that its products are safe for consumption.)

Strike promoters met at the National Agricultural Bureau and People’s Dialogue and Agreement in Bogota on September 8th and issued a new set of demands: The government had to cease the spraying of illicit crops, allow the farmers to utilize their own seeds and review the country’s own agricultural law 9.70, passed in 2010, which made it illegal to share, sell or trade natural seeds between farmers – effectively rupturing Colombia’s agricultural and the country’s ecology. As it stands, the Colombian government has yet to comply.

If Colombia strays from the terms of the trade agreement, it could jeopardize the nation’s political and economic relationship with the U.S. Yet if the government does not meet the farmers’ demands, the possibility remains that the riots will begin again. My aunt Catalina, for one, believes the country is on the brink of a social revolution. “People keep bringing up the last time farmers rose up,” she says. “Colombia defeated the Spaniards.”