Why the Chapecoense Football Team’s Plane Ran Out Of Fuel

TODAY COLOMBIA NEWS – MUCH remains unknown about LaMia Airlines flight 2933, which crashed into the hills of Medellin on November 28th, killing 71 of the 77 people on board. 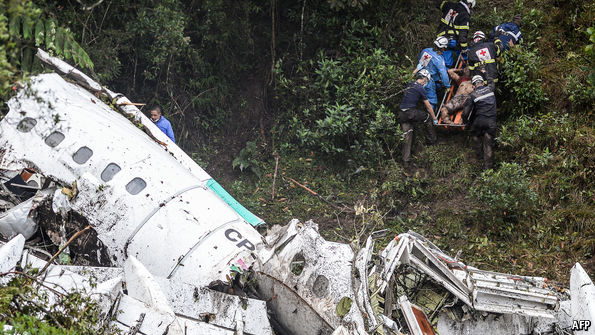 Fans of Chapecoense, a Brazilian football team, must wait to hear the full story of how a chartered plane carrying 22 of their players and several staff members failed to arrive safely. (Only three players are among the survivors.)

Many Brazilian reporters covering the crash knew one of the 21 journalists on board, and are starting to ask why these lives were lost in such devastating circumstances.

The chartered plane was to fly the team from Santa Cruz de la Sierra in Bolivia to the Colombian city of Medellín for the biggest match of their lives, the final of a continental club tournament. An earlier commercial flight had brought them from São Paulo in Brazil to Bolivia.

The private jet was scheduled to stop for refuelling in Cobija, in Bolivia’s north. But it never did. In a black-box recording leaked to the press, the pilot, Miguel Quiroga, could be heard saying that the plane was running out of fuel as it approached Medellín. Colombian authorities have confirmed that the plane had no fuel when it crashed.

Plane crashes owing to fuel exhaustion are extremely rare. Usually, a technical error causes the amount of fuel on board to be misjudged.

In 2005, a Tuninter Airlines plane that crashed in the Mediterranean Sea had had its fuel gauge replaced the night before. Technicians mistakenly installed one designed for a smaller aeroplane with a smaller fuel tank.This caused the crew to “fill” the tank with insufficient fuel; 16 of the 39 people on board were killed. 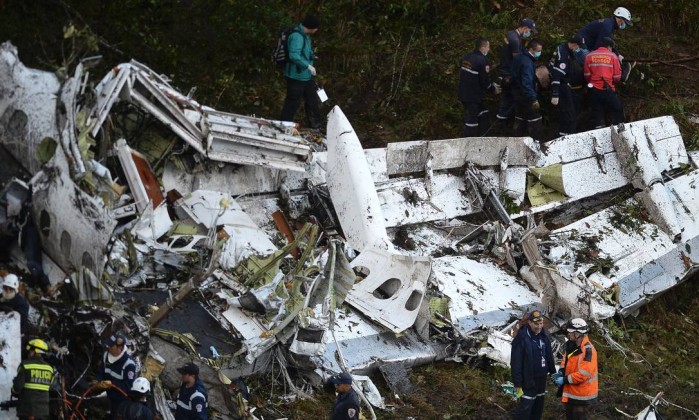 In 1983, crew members accidentally fuelled an Air Canada (flight 143) passenger jet using pounds, not kilogrammes, as the unit of measurement. The plane took off with its tank less than half full and was forced into an emergency landing on a racing track (all survived). Yet in this latest tragedy, everyone knew exactly how much fuel was in the plane when it took off: a full tank. What happened?

According to O Globo, the Brazilian news outlet, the first leg of the journey from São Paulo to Santa Cruz de la Sierra was delayed by around one hour. That meant that the refuelling stop in Cobija was not possible, as the airport there shuts down at night. So, the pilot opted to fly directly from Santa Cruz de la Sierra to Medellín.

That decision has become the subject of tremendous scrutiny. The range of the plane model, a British AVRO RJ-85 jet, is 2,965km with a full tank of fuel, according to JACDEC, an air-safety website. That is less than the distance between the two airports.

Global civil-aviation regulations state that any plane flying internationally must carry enough fuel to make it to an alternate airport, and enough to fly for 30 minutes after that. And yet somehow, the plane was on course to arrive safely. Quiroga had requested for priority to land with air-traffic control, but he was rebuffed: another plane had a fuel leak and needed to land first. Only after that, when the jet had already begun to descend, did he declare an emergency.

It is not clear how or why the last-minute change in flight plan was approved. According to El Deber, a Bolivian newspaper, airport officials in Santa Cruz de la Sierra raised several questions about it. Quiroga reportedly made various verbal guarantees that the plane had enough fuel for the trip.

Other considerations may have been on the pilot’s mind. Quiroga was a co-owner of Lamia airlines. As such he had a unique set of incentives in this situation. Postponing a chartered flight in a time-sensitive industry is not good for business. Once in the air, telling officials that the plane is running out of fuel is less than desirable: the penalty for any firm being caught flouting regulations is huge. It is too early to say whether such factors played a part in his decision-making.

It is also unclear why a top-tier football team was flying to a major sporting event with an airline like Lamia in the first place. The firm was founded in 2009 in Mérida, a small city in western Venezuela. Last year Lamia Bolivia, a separate business entity, was set up. The airline claims to specialize in chartered flights, particularly for football teams. The only functioning plane it has ever owned is the 17-year-old jet that crashed into the muddy Colombian mountainside.

The players of Chapecoense were not the only footballers to fly with LaMia. Few airlines provide chartered flights in Latin America, and none does it cheaper. “A flight that another company charges you US$100,000 for, Lamia offered for US$60,000,” an industry insider told La Nacion, an Argentine newspaper.

Among LaMia’s customers were Atletico Nacional, Chapecoense’s would-be opponents in Medellín, and Argentina’s national football team. The squad’s luminaries, including Lionel Messi, perhaps the greatest player of all time, boarded the doomed Lamia plane just two weeks before the crash, flying from Buenos Aires to Belo Horizonte for a World Cup qualifier.

LaMia’s chances of doing business with football teams in the future seem shot. Karina Graziano, the director of communications of the Argentine Football Association, told The Economist that it will no longer use the airline. The association may look to buy its own plane, or failing that, fly with Aerolíneas Argentinas, the national carrier. Other customers of LaMia will need to make similar contingency plans: Bolivia’s aviation authority has suspended its operating licence.

Chartered airlines exist for a reason. Many wealthy travellers—and football teams—need to fly at odd hours or at short notice. Sometimes, as with sports clubs and business delegations, large groups must travel together.

Commercial airlines cannot always provide that service. Yet chartered and private flights are substantially more likely to crash, with pilot error being the cause in nearly 90% of cases. A Bloomberg News review last year found that private crews are overworked and demands from hurried passengers to land on time can encourage reckless decision-making. Lamia Airlines flight 2933 is another reminder of the horrible costs that people risk by cutting corners in the air.