Why Peace May Finally Have A Chance In Colombia 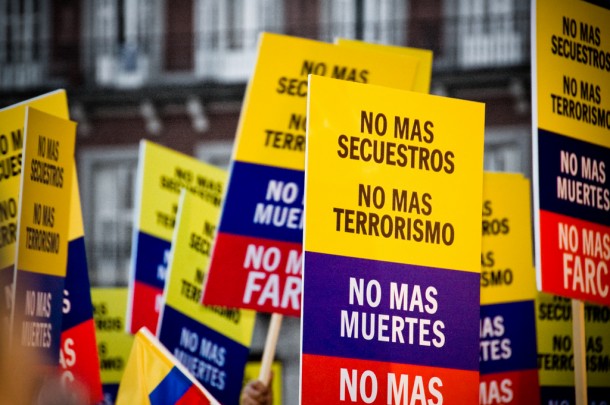 The negotiations that are set to begin formally in October are by no means the first attempt to demobilize members of the Revolutionary Armed Forces of Colombia (FARC) and incorporate the guerilla organization into the political process. There’s no guarantee, therefore, that these talks will succeed where others have failed. And yet it’s still worth asking the question: are there reasons to believe that this time things could work out better? I believe the answer is yes, mainly because the conditions that caused previous peace talks to fail have changed.

The first effort to put an end to Colombia’s internal conflict took place in the mid 1980s. At the time, certain demobilized FARC fighters set up a political party, the Patriotic Union, which decided to participate in presidential elections. They were decimated in the process: some 3,000 Patriotic Union members – a group that included party activists, leaders and candidates – were killed by paramilitary fighters. As we now know, those paramilitary groups had ties with certain sectors of the Colombian government.

The second attempt to stop the war failed in 2002, but for different reasons. Not only were FARC leaders wary of trusting the government, they were also aware of how little popular support they enjoyed. Some polls suggested that only 5% of the public still backed the organization. Even in a best-case scenario, they figured, the FARC would end up as a marginal political force. In a worst-case scenario they could face reprisals. It didn’t make sense, therefore, to surrender, especially at a time when they enjoyed more military and economic power than they had ever had. The FARC had a well-equipped force of some 16,000 to 20,000 fighters, plus effective control over about 20% of the Colombian territory. A study financed by the World Bank showed that in addition, the FARC was earning as much as $500 million a year from its involvement in the drug trade, as well as $200 million annually from kidnappings and extortion.

The FARC, in other words, had no incentive to negotiate with the government in good faith. More recently, however, the governments of current President Juan Manuel Santos and his predecessor, President Alvaro Uribe, provided incentives. For one thing, they hit hard at the FARC militarily, effectively cutting the guerilla army’s numbers down to between 8,000 and 9,000 armed individuals. They also delivered a blow to the FARC’s top leadership. Prior to 2008, the organization’s seven-member Directorate had not suffered a single combat casualty. Between 2008 and 2012, three of its members were killed by Colombian armed forces. A fourth – the FARC’s founder himself – died of natural causes.

All of that demonstrates the degree to which the military has infiltrated the FARC as well as the degree to which the organization’s Directorate has lost control over its bases. This in turn resulted in a drop in the revenue the FARC was able to generate from kidnappings, leading eventually to a decision by the organization to give up the practice all together as a condition for initiating negotiations with the government.

In addition, the governments of Uribe and (to a lesser degree) Santos managed to significantly reduce Colombia’s overall homicide rate and to demobilize the majority of paramilitary fighters. As a result, there is now less of a threat of reprisals against the FARC should they agree to lay down their weapons.

To sum it all up, the FARC now has a number of incentives that simply weren’t there in 1985 and, even more so, in 2002. The government also has incentives for wanting to negotiate an end to the conflict – despite the fact that militarily speaking, it currently has the upper hand.

That’s because as I already mentioned, the FARC still has between 8,000 and 9,000 armed fighters who are sheltered in vast forested areas that are sparsely populated but full of resources. Attacks against oil pipelines have increased – up 340% over the course of the first seven months of 2012. The FARC use the attacks to extort money from companies that operate in the area and to give themselves more negotiating power with the government, whose economic growth strategy depends in part on encouraging private investment in the very industries that operate in those regions. These are places the Colombian state has never fully controlled and from which, for half a century, it has failed to dislodge the FARC. Accomplishing that objective via negotiations would cost the sate far less time, money and human lives than if it were to drag the war out even longer.