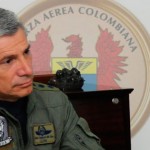 The diplomatic squabble over Russian military planes violating Colombian airspace has deepened, after the Colombian Air Force revealed that in the same month, Russia had properly requested permission for similar flights.

In October 2013, two approvals were issued to Russia to fly over Colombian territory from Russia said the commander of the Colombian Air Force (FAC), General Guillermo Leon.

But then on 30 October and again on 1 November, two Tupolev-160 supersonic fighter-bomber aircraft crossed Colombian airspace on a flight between Venezuela and Nicaragua. On the first violation, Colombia lodged a protest, on the second, it sent two Kfir fight jets to intercept and escort the Russian aircraft.

The El Spectador newspaper said General Leon hinted he did not understand why Russia didn’t simply ask for permission. This year, Russia gained permission for five crossings on the same route between Venezuela and Nicaragua.

On the diplomatic front, Russia has received an official note of protest from Colombia over the airspace violation and the Russian Foreign Ministry responded on Thursday.

“The Foreign Ministry has received that note. We’re carefully analyzing their content,” ministry spokesman Alexander Lukashevich said,”and of course, we are preparing a response.”