We’ve never gone so far down the road to end the conflict: President Santos 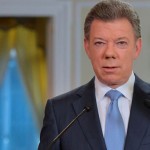 The latest agreement with the FARC marks the most progress ever made toward peace in 50 years of armed conflict in Colombia, said the Colombian President on Wednesday.

“Never before have we gone so far down the road to end our conflict,” President Juan Manuel Santos told the Colombian people in an address. “This shows, without a doubt, that we are on the right track and that peace is still possible in our country.”

“It is an agreement that serves our whole society, that facilitates the creation of new political expressions which promote pluralism and tolerance,” he said, “But peace is not just made in Havana. Peace is built by people – you build it! – and for that we must strengthen mechanisms for participation.”

President Santos also defended the length of talks, which have been running for a year.

“I understand the impatience and skepticism of some. I am impatient too, but first we have to understand that peace is not with friends but with enemies, that these processes are complex, and that a 50-year conflict is very difficult finish in 50 weeks.”

The FARC have also hailed the agreement as an important achievement, saying political participation in civil society is a key step to peace.

MORE: Political participation deal ‘one of the most important achievements’: FARC

Since the agreement, the United Nations, a key US congressman and an international court have all sent messages of support to the peace negotiators.

The post We’ve never gone so far down the road to end the conflict: President Santos appeared first on Colombia News | Colombia Reports.