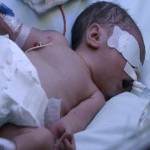 A premature newborn baby was revived earlier this week in the Pacific state of Choco, Colombia, after being declared dead for 10 hours.

Pediatricians had declared the premature baby dead at 3:20 a.m., and after remaining in the birthing center of the hospital for a couple hours, the baby girl was sent to the morgue. There the baby spent seven hours sitting in a box until her father came to collect her, and the attendant recognized signs of life in small movements and soft cries.

After realizing the baby was still alive, medics rushed the baby on a plane to Bogota to receive treatment for the baby’s underdeveloped lungs.

The baby is part of 1 percent of babies who need external machines at birth to perform basic life functions such as breathing.

A specialist doctor Javier Zagarra told weekly Semana that the mistaken death declaration could be attributed to difficult recognize heart rate at time of birth.

“In some cases the heart movements are not perceptible even though the newborn is alive, they can declare it dead,” said Zagarra. “When they wrap the baby in a sheet, upon receiving warmth, the baby can then revitalize.”

The baby is currently in intensive treatment in a specialized care unit in a Bogota hospital.

The baby will be called “Milagros” (Miracles), her parents decided.