‘We want a Colombia without coca’ : Chief govt peace negotiator 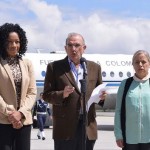 Colombia’s chief negotiator in ongoing peace talks with the FARC rebel group indicated that an eventual solution to the problem of illicit drug cultivation would be necessary to bring an end to the country’s decades-long armed conflict.

Humberto De la Calle was quoted Wednesday in a government press release arguing that the eradication of coca in Colombia should be an important goal for both the country and the international community.

This as Colombian government and FARC delegations enter the 17th round of negotiations in Havana and take up the “solution to the problem of illicit drugs” agenda point.

“We want a countryside without coca [plants], we want our farmers to refrain from cultivating these crops because the only thing that is left in these regions is violence, poverty and marginalization,” said De la Calle, who called for programs of illicit crop substitution to be developed in accordance with talks’ prior agreement concerning agrarian reform.

“There is no better scenario to promote initiatives like this because in the end this is a conflict that has been fuelled precisely by drug trafficking,” he explained.

The former Colombian vice president said the government also intends to address the issues of narcotics processing and marketing and come up with new strategies to strengthen public health and internal prevention programs.

“There will be no real end to the conflict without tackling this phenomenon at its roots, as we won’t be able to design a sustainable agrarian reform without solving the problem of the illicit drugs,” said De la Calle, stressing how the issues on the peace talks’ agenda are interrelated.

While underlying the progress made during the first year of peace talks, De la Calle warned that other important challenges have yet to be dealt with.

“The dream of every Colombian to finally reach peace is what makes us continue on this trail,” he said.

Peace talks between Colombia’s government and the country’s largest rebel group, the FARC, began little over one year ago in Havana, Cuba. If successful, the negotiations will end an armed conflict that has killed more than 220,000 Colombians in over 50 years of violence.