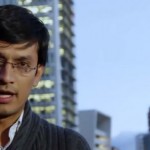 Thirty-seven year-old Senator Camilo Romero announced his registration as a pre-candidate Tuesday for Colombia’s presidency, on the ticket with the liberal Alianza Verde (Green Alliance) party.

Surrounded by family and friends at the registration, Romero said that he is seeking Colombia’s highest office because, “in Colombia [now], everything is ready for an election… These scoundrels [currently in office] are comfortable without any answers or innovation, and [now] there is the possibility of success.”

“We believe that we deserve a different country, a better country, and that we can advance towards that,” said Romero.

The young, outspoken anti-corruption senator expressed his desire to create a “great alliance” with the Colombian people in order to restore moral and social confidence in Colombia.

On the subject of ongoing peace talks between Colombia’s government and the rebel group, FARC, Romero said that recent success has been “transcendental” for the country, according to newspaper El Espectador. Though he did warn that many Colombians do not feel as though their voices are really represented in the process, which could be a threat to an eventual agreement.

Romero wishes to find a way for citizens to be a part of creating “global peace.”

“What is being discussed in Havana, Cuba –where peace talks are occurring– is important, is transcendent, but it is only a fragment of the greater peace,” the senator affirmed.

Romero did say that more crucial to achieving general peace is demobilizing not just illegal armed groups, but the “traditional political class, which is much more harmful and nefarious than the guerrillas and paramilitaries combined.”

“Today due to the traditional political class, 71% of congress has been discredited and smeared,” he claimed, “The path away from that starts with the citizens, and for this reason, we should take a step towards confronting this class.”

Romero explained that part of this first step will be that he will not present his name in front of congress as a candidate as is customary, hoping to send a message that Colombia’s legislature needs to change its “moral values and ethics.”

“It is not enough to create a party and a tool. We need to go together with the country…to start together with Colombians…in order to say that there is a path and a new country to create,” he explained.

“We will go forward for best country that we can be,” concluded Romero.

The official candidates for the presidency thus far are the Polo Democratico’s Clara Lopez and the Uribe Centro Democratico’s Oscar Ivan Zuluaga.  Elections will occur on May 25, 2014. Incumbent Juan Manuel Santos must announce whether he will seek a second term by the end of the month.