‘We are not going to allow another Green War’: President Santos 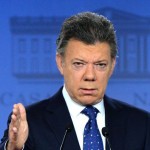 The government will take immediate action to prevent the reescalation of violence among rival emerald-mining families in central Colombia, said President Juan Manuel Santos on Monday.

The comments came in the wake of a grenade attack against Pedro Rincon, one of the most influential emerald magnates in the central state of Boyaca, that left four people dead and ten injured on November, 9.

Rincon accused other prominent mining families in the area of perpetrating the attack, and many feared and end to the uneasy peace that brought an end to the decades-long “Green War,” a bloody factional conflict for control of Colombia’s sizable emerald trade.

Santos himself admitted concern over the potential for renewed violence in eastern Boyaca and called on the ministry of mining, interior, defense and the general prosecutor to join forces in order to “show the government’s presence [in Boyaca] in a permanent form.”

He also emphasized the meaning of peace in Boyaca for Colombia as a whole, stating that “all Colombians will benefit from this peace,” going on that, “because of this we need to look for peace and I am asking you, friends from Boyaca, that you help us to fulfil it.”

Started in 1961, the Green War was fought the area’s largest mining families, who recruited private paramilitary armies to fight turf battles and quash worker uprisings. Violence reached a peak during the mid 1980s, when various drug cartels became embroiled in the conflict.

The region has remained relatively calm since a tentative peace was brokered by the Catholic Church during the early 1990s, but with the recent death of Colombia’s unofficial “Emerald Czar” and the attack on his apparent successor, the situation has once again grown tense.

The post ‘We are not going to allow another Green War’: President Santos appeared first on Colombia News | Colombia Reports.