At Viva Air low-cost means focusing on additional charges and the worst in customer service.

Viva Air Colombia is a low-cost airline, Based in Rionegro it is a subsidiary of Irelandia Aviation and third largest airline in the country. 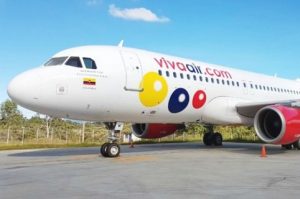 A low-cost airline is one that is operated with an especially high emphasis on minimizing operating costs and without some of the traditional services and amenities provided in the fare, resulting in lower fares and fewer comforts.

But at Viva Air, while the emphasis is in low-cost, it ends up being more expensive if you are fully familiar with “their” policies.

In my recent return trip to Medellin, my arrival in Bogota was delayed due to weather. The airline (not Viva) was delayed in leaving Bogota, resulting in a delay in departure from San Jose, Costa Rica.

Down to few minutes between connection, Wingo was nice enough to tell me that if Viva was would board me, they would provide confirmation of the delay to help me in the event I would be asked to pay a new fare if I missed the connection.

With only a carry on and luck on my side, immigration was nice enough to move me and another passenger in the same boat to the front of the line.

With literally minutes before boarding closed and a mad dash to the gate and security, I wasn’t going to miss my flight.

No, at Viva it would cost me another 90,000 pesos. More than the original cost of the flight. A kind lady, experienced with Viva, suggested I take the wheels off.  Why? Iis a standard carry on. Standard to every other airline, but not Viva.

Arguing was futile. This staff was fully trained in rudeness and their standard line, “this is the cost” if you want to fly Viva.

In the end, Viva loses at least one customer, me. Maybe more. I am a great believer of Karma.

I will prefer to pay a higher cost to any other airline but Viva. I don’t make sense. I am being irrational. But one of the recommendations I make about living in Colombia is customer service above the rest of the other Latin American countries I have visited.