Violence down during unilateral ceasefire, but FARC’s compliance not complete: reports claim 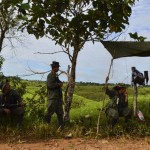 Colombia’s FARC rebel group failed to meet the terms of the unilateral ceasefire it declared on December 15, according to a pair of reports released Wednesday.

The reports, published by two separate Colombian think tanks, claimed that the FARC did not fully adhere to its self-imposed suspension of military activities, which was declared one month ago and ended this Wednesday, January 15.

The FARC, Colombia’s oldest rebel group, has been negotiating a possible peace agreement with the Colombian government in Havana, Cuba, since November of 2012. No ceasefire, however, was ever implemented prior to peace talks, and the government did not respond in turn to the FARC’s recent initiative.

The Foundation for Peace and Reconciliation recorded 2o military confrontations between the FARC and Colombia’s armed forces in the one-month ceasefire period, compared to an average of 182 monthly confrontations in the 11 months before, reported the El Espectador newspaper Wednesday.

Of these 20 confrontations, the think tank reportedly classified four as unilateral offensive acts by the FARC, while four cases could not be classified due to insufficient information.

The Center of Resources for the Analysis of Conflicts (CERAC), on the other hand, attributed 12 offensive acts to the FARC during the same period, confirming the general conclusion that the FARC did not completely honor its stated intentions.

The CERAC report made a point of highlighting that while the ceasefire was not fully implemented, violence did go down significantly.

Regardless of which figures are valid, the FARC clearly reduced its acts of aggressive violence in comparison with the 38 attacks recorded between Novemeber 15 and December 15, 2013, or the 70 attacks recorded during the month of October.

According to the CERAC report, the FARC was responsible for two deaths – one civilian and one soldier — during the past month, as compared to seven the month before.

CERAC researchers claimed that the ceasefire brought about a 65% reduction in overall violence pertaining to Colombia’s longstanding armed conflict, a level comparable to the one observed during the last FARC ceasefire, declared in 2012 and maintained for two months.

The report also mentioned a possible change in FARC strategy as a contributing factor the drop in deaths in particular.

CERAC noted that rate of threats and explosive attacks has risen during the ceasefire’s period, composing half of the 12 military operations classified as offensive acts by the think tank, while attacks on military bases and urban centers have gone down.

The FARC, the report speculated, may have shifted tactics as a way to gain support from the international community and Colombia’s society without ceding military power entirely.

Both reports infer that the failure to comply with the ceasefire could also indicate the limited authority of the Havana leadership over the organization’s different units on the ground.

The CERAC report actually mentioned a possible “disintegration” of particular FARC units. Because of years of aggressive government offensive, the FARC has had to transition to a less-centralized hierarchical structure. Groups that already act semi-autonomously from the organization’s leaders may have actively split from the group during the ceasefire, especially the ones that fear the loss of income from drug-trafficking and illegal mining activities that would likely arise from a larger peace agreement.

The assumption was applied in particular to the FARC’s 36th Front, active in the central department of Antioquia, a region that saw a noted rise of rebel activity during the ceasefire.