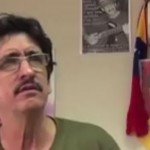 A Venezuelan court has ordered the immediate release of FARC crooner “Julian Conrado,” who according to the Colombian government will be taking part in ongoing peace talks in Cuba.

Conrado, whose real name is Guillermo Enrique Torres, was arrested in Venezuela in 2011 and has since been waiting to be extradited to Colombia where authorities are investigating his alleged responsibility in crimes committed by the FARC, Colombia’s oldest rebel group.

The rebel is mainly known in Colombia as the main interpreter in revolutionary music videos produced by the guerrillas.

According to Venezuela’s Supreme Justice Tribunal, the FARC crooner had to be released immediately as Colombia’s withdrawal of an extradition request removed all merit to keep Conrado incarcerated. The FARC rebel has no pending criminal investigations in the neighboring country.

Colombia’s foreign ministry confirmed the withdrawal of the extradition request in a press release.

“The Government of Colombia would like to inform that it withdrew and canceled the extradition requests pending for Guillermo Enrique Torres Cueter, alias ‘Julian Conrado,’ who will become part of the delegation of the FARC-EP at the peace talks in Havana, Cuba,” said the press statement.

Colombia’s Prosecutor General’s Office told press earlier on Thursday that it continues to carry out criminal investigations against the FARC rebel over Conrado’s alleged complicity in the recruitment of minors and forced displacement.