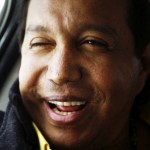 Three days of mourning and folkloric festivities commemorated the death of Diomedes Diaz — a legend of Colombia’s national treasure vallenato and yet an infinitely controversial figure — who died of a heart attack in his home on Sunday. His funeral was held on the following day, gathering hordes of admirers from all over the country.

Hundreds of devoted fans – shocked at the singer-songwriter’s unexpected death at the mere age of 56 — united in Diaz’s hometown of Valledupar to give him country-style sending off he’d always dreamed of.

The air was filled with the “El Cacique de la Junta” (the chieftain of Junta )’s heavily folkloric melodies, with the accordion-imbued tunes that made him famous ringing out above the heads of crying and celebrating fans alike, Colombian newspaper El Tiempo reports.

The crowds kept Diaz’s spirit alive, creating an atmosphere resembling a vallenato festival rather than a burial scene. Surrounded by photographs and paintings depicting one of Colombia’s best –loved celebrities, the facades of buildings were covered in signs reading “Diogenes is not dead” and “The chieftain of the Junta will live on in our hearts.”

In the midst of the folkloric festivities, the solemnity of the occasion was nonetheless never forgotten.

Despite temperatures of over 100 degrees Fahrenheit, people congregated from the early hours of the morning to see the body of the prematurely deceased artist. Exhibited in the setting for many a vallenato party in the past: Alfonso Lopez square, it will remain there until his burial at 5 p.m. on Christmas Day.

These included family and friends from his native town of La Junta in La Guajira State.

“La Junta is silent,” Juan Manuel Gutierrez, a composer who collaborated with Diaz in the past, told El Tiempo. “This morning it was like the entire village was empty because no-one wanted to leave their homes. He was the most loved personality that La Junta gave birth to.”

One of these women, Magaly Diaz, indignantly confronted the police because she was not allowed to see the corpse – exposed in a wooden casket and ornately dressed — for more than 20 seconds.

“Diomedes belongs to the people,” she protested. “He doesn’t belong to anyone, and we all have the right to see him to say goodbye.”

The town’s flag was flying at half-mast as a sign of respect by Valledupar’s mayor, Fredys Socarras, who had also declared three days of mourning.

Alvaro Lopez tearfully reminisced about his long-time collaborator, remembering how the last time that they were together had been last Friday in Baranquilla during the launch of Diaz’s last ever album, La vida del artista (The life of the artist).

“He never fought with his co-workers,” Lopez eulogized warmly. “He was the most generous man that I’ve ever met.”

In this final album, Diaz recorded his first ever duet with one of his sons –it is said he had 28 in total – Martin Elias.

As Elias observed the funeral scene, he spoke about what had been one of his proudest moments.

“My dad invited me to record with him and I couldn’t believe it,” he told El Tiempo. “The best thing was that he was really happy with the result of the song “Neither girlfriend, nor friend,” which we made in a single day.”

“I couldn’t believe it,” Martin Elias said. “But I remembered the phone call he’d made to me on Saturday: he’d said that he could die a happy man because I could replace him. He worried me when he told me that he was feeling very tired, that he couldn’t take it anymore.”

When asked if he felt ready to carry on his father’s legacy, Martin Elias replied:

“There will never be anyone like my father; no-one would be able to replace him.”

Diaz’s musical career kicked off in 1976 with the release of his first album, “Herencia vallenata” (“A vallenato inheritance”). Despite a history of homicide convictions, drugs and missed performances, he was not to stop producing music until his passing on December 22, when a cardiac arrest took his life in his family home.