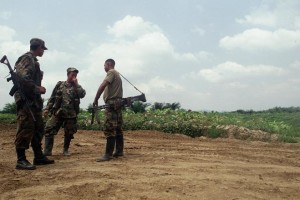 The United States is providing military intelligence to fight paramilitary groups formed from the now-defunct AUC, according to President Juan Manuel Santos.

“The most effective strategy against these organizations is intelligence,” President Juan Manuel Santos told Caracol Radio.

The United States and Colombia had already announced the formation of a special task force to combat groups like “Los Urabeños,” that were formed by paramilitaries who refused to demobilize after peace talks between 2002 and 2005.

US military focus in Colombia shifts from rebels to paramilitaries

The group, currently the most powerful of paramilitary groups, has been pressing to again be included in peace talks currently held with the FARC and ELN, their arch enemies, but Santos flatly rejected this possibility.

“The paramilitaries had their fifteen minutes with Justice and Peace, they were given the opportunity to reintegrate, and now that is over,” Colombia’s president said.

As part of the Urabeños pressure on the government, the group has begun terror campaigns in territories under their control, threatening human rights and labor right workers alike.

However, the Santos administration insists these groups are criminal organizations, not paramilitary groups.

“Today the criminal groups have no justification whatsoever to say that they are political actors. These groups are not political actors but can subject themselves to justice.”

Despite pressure from the FARC to acknowledge these criminal groups as right-wing paramilitaries, both the US and Colombian governments maintain that all paramilitaries disbanded in 2006.

Instead, the governments use the less-threatening term “BaCrim” to dissociate them from the paramilitary groups from which they emerged.

According to the Colombian national police, the “BaCrim” consist of about 3,000 members spread across three gangs who earn millions of dollars from drug trafficking and illegal mining.

Despite attempts to downplay the serious threat posed by these neo-paramilitaries, they have displaced over 300,000 people and have murdered more than 8,000 since 2006, according to official figures.

Studies by conflict-monitor Indepaz revealed that in the first quarter of 2016, 14 paramilitary groups were active in 146 of 1,100 municipalities spread over 22 of Colombia’s 32 provinces.

These post-AUC paramilitaries are also widely recognized as the main obstacle preventing Colombia’s government and the FARC from reaching a peace agreement which would end over fifty years of bloody conflict.

The US’ pledge of support will fulfill the promise made by US Secretary of State John Kerry in March to help protect demobilized FARC fighters who would be easy targets for dissident comrades or for the neo-paramilitaries.

US aid in fighting the right-wing groups is slightly ironic, considering the first generation of paramilitaries were introduced to Colombia between the 1950s and 1960s by the US Military.

In response to the growing threat of rural communist enclaves that rejected the authority of the central government, the US decided Colombia needed a military-civilian organization to protect private and political interests from the leftist armed forces.

Unsurprisingly, as the leftist guerrillas grew throughout the decades, these right-wing armed civilian groups also mutated and turned to drug trafficking in the 1980s and 1990s to finance their violent crusade against the FARC.

The trail of blood left by the paramilitary group the AUC landed it a place next to the FARC on the US” list of international terrorists, amidst the thick of the US’ siege against Colombian drug traffickers through “Plan Colombia.”

Now, more than 15 years later, the names of these groups have changed but the leaders, the violence, and the corruption remains the same.

Though US military intelligence will do little to untangle decades of embedded political corruption, it should inch the peace process forward towards an end to a conflict that has generated over 7.5 million victims.