US Agreement Takes Plan Colombia to a Local Level

Colombian and US officials have signed an agreement providing US law enforcement support to four Colombian municipalities, a move which signifies the increasing importance of local networks within Colombia’s criminal landscape.

On November 7, the US embassy in Bogota announced the signing of the agreement between Colombian and US government officials and representatives of Colombia’s national police, to improve security in the municipalities of Tibu (in Norte de Santander department), Chaparral (Tolima), Caucasia (Antioquia) and Ovejas (Sucre).

TheUS$1.6 million project aims to support the national police force in urban centers and help municipal governors improve their territorial management, reported Caracol. According to the agreement, the four municipalities were selected for their links to drug cultivation, armed groups and other criminal activities. 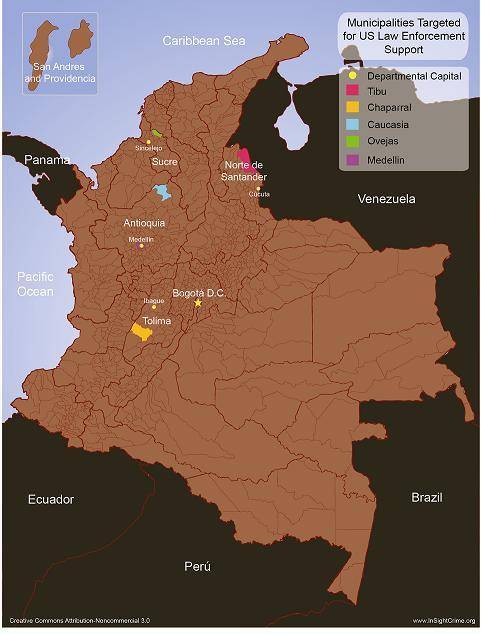 Improvements covered by the agreement will include the purchase of new security equipment and technology upgrades, such as the implementation of closed circuit TV systems, reported CMI.

The municipalities selected to receive US aid are home to an array of Colombia’s criminal players. Norte de Santander is traditionally a stronghold of the Revolutionary Armed Forces of Colombia (FARC), while Caucasia and Ovejas are located in territory controlled by the paramilitary successor organizations known as BACRIM (from the Spanish abbreviation for “criminal bands”).

Caucasia sits on a key drug trafficking corridor between second-largest city Medellin and the Caribbean coast, and has been on the front line of the territorial battle between key BACRIM groups the Urabeños and Rastrojos. Chaparral is the most surprising choice — the town has been mentioned in connection with the Urabeños, but it is not typically cited as a major hotspot for criminal activity to the extent of the other municipalities.

The introduction of US aid at the local level appears to be the latest adaptation of Plan Colombia in response to the fragmentation of trafficking networks within Colombia. Although US-backed efforts over the last decade have been effective in dismantling transnational cartels, the breakup of these organizations has contributed to the rise of the BACRIM, which currently represent the greatest threat to Colombian security, according to police.

The growth of domestic demand within Colombia has also led to the rise of local micro-trafficking networks, while the production end of the country’s drug trade has undergone a seismic shift. Where once paramilitary groups hunted down and killed guerrillas, the BACRIM have close working relationships with left-wing rebels involved in coca production.

However, while this agreement represents a significant development in US support for Colombia, where the guerrillas and BACRIM operate they are usually highly successful at co-opting local authorities. It is therefore unclear how effective this new assistance will be if it is only in the form of technology to be used by those same authorities.