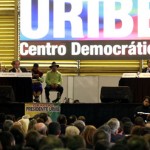 Former President Alvaro Uribe announced at a Monday press conference that he and his party, the Centro Democratico, oppose the acquisition of uncultivated land by foreign investors.

In a press conference, Uribe said that if he wins his bid for a seat in Colombia’s senate, any laws that supports the sharing or ownership of land with foreign investors will face “hard opposition” from the right-wing Centro Democratico party.

The former president asserted that allowing for foreign investors to come in and use vacant Colombian land, is not the way to help the farmlands of Colombia.

“The foreign appropriation of land cannot be allowed. It is not a political issue but rather the protection of the reserves of these flatlands,” the former President proclaimed.

Uribe suggested that criminals or drug traffickers who wish to claim this uncultivated land will also not be tolerated.

“In regards to the land we want to protect, we are going to accelerate the extinction of the control of land acquired by the corrupt, the drug traffickers,” continued Uribe.

This statement comes as a response a law that has been reintroduced to Congress by President Juan Manuel Santos. The law was first introduced last year but was withdrawn by the president after being rejected by human rights groups and farmers  for allowing the “possibility” of foreign investment and land accumulation.

Centro Democratico presidential candidate Oscar Ivan Zuluaga will support taking action against foreign investment in Colombian land as well, and has stated that this fight will be in support of the farmers of country as well.

According to Oxfam International, with over 80% of its land in the hands of 14% of its landowners, a figure that places Colombia in 11th place worldwide among countries with the worst distribution of land and 2nd worst in Latin America following Paraguay.

Agricultural land reform was the first point of consensus reached between the country’s largest rebel group the FARC and the government in an ongoing six-point peace negotiation aimed at ending a half-century of civil conflict.