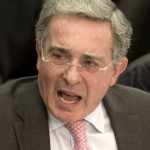 Alvaro Uribe trusts the armed forces to keep him safe from any potential attempts on his life by the FARC rebel group., according to a statement made by the former president Tuesday.

Uribe said he will remain on the campaign trail for presidential candidate Oscar Ivan Zuluaga, despite public warnings from Defense Minister Juan Carlos Pinzon that the FARC could be plotting to assassinate the former head of state.

In light of the threat, Colombia’s armed forces immediately established a protection service for Uribe, and the ex-president said that he trusted his security detail completely and was appreciative of President Juan Manuel Santos for affording him the services of the police and army.

“I don’t have details [on the plot] and I didn’t ask about them…I reiterate my thanks to the Ministry of the Defense and the President of the Republic…I give thanks to the armed forces who protect me a lot, and to God for having protected me,” said Uribe.

Uribe implied that he was no stranger to the complexities of security intelligence and affirmed that threats from the FARC would not modify his plans in any way: he will still join his Uribe Centro Democratico’s presidential candidate Oscar Ivan Zuluaga on the campaign trail as scheduled, reported Colombia’s W Radio.

“I already am a white-haired grandfather, but that doesn’t mean I don’t still have energy!  How could I not spend it working for my compatriots?” Uribe asked.

After saying that the rebel group is still far from being a legitimate part of any political party, he concluded with a fierce anti-FARC message directed towards the Colombian people.

“To Colombians, I say that this country, through the path of democracy and without being subjects to terrorism, can overcome all social problems.”