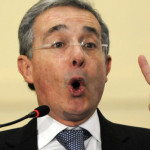 Former President of Colombia Alvaro Uribe threatened to take the national government to court should an impunity agreement emerge from ongoing peace talks with the FARC rebel group.

Uribe criticized the recent political participation deal made during the peace talks agreements, according to the El Colombiano newspaper, one which he has consistently claimed would afford immunity to high-level FARC operatives accused of widespread human rights abuse.

President Juan Manuel Santos has assured the general public and members of the military that ongoing peace talks with the FARC will not result in impunity for the guerrillas, and details of the deal have not been made publicly available.

MORE: Santos assures Colombian military that FARC will not be granted impunity

But that has not stopped Uribe from renewing his claims to the contrary and, now, threatening to take the Colombian government to international court in the event that he is correct.

“Impunity invites an escalation of violence, there will be more recurrent violence,” said Uribe.

During the upcoming election, the Uribe Centro Democratico party is running right-wing Uribe ally Oscar Zuluaga against the incumbent Santos, largely on an anti-peace talks platform.

Uribe and Zuluaga, both under criminal investigation for their alleged dealings with the now-defunct AUC paramilitary umbrella organization, have been among the most vocal opponents of ongoing peace talks since before negotiations began last November in Havana.