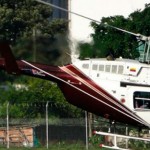 The helicopter went down last Thursday in the town of Anori, located in the state of Antioquia, and caused the death of five members of the National Army.

“The company that makes the helicopter that crashed in Anorí, Antioquia, confirms that it was not an accident. It was hit by the terrorist group FARC,” said Uribe, according to Caracol Radio.

An unnamed technician from the Civil Aviation Unit reportedly aided Uribe in his investigation.

The technician is said to have provided the ex-president with a report indicating that the gun shot that hit the oil tank of the helicopter could not have come from inside the cabin, as the government initially reported.

Army 7th Division Chief of Staff Colonel Rafael Salas told Caracol Radio that he had not been been informed of the report, but that officials inthe Civil Aviation Unit will be the ones to ultimately determine the cause of the crash.

“No, so far the commission of technical civil aviation authority who is conducting investigations has not delivered statements or official information on what happened. I do not know to what extent the president has had access to the information being collected,” he said.

“We do not know if it was action by terrorism, action of the machine, if there was a human error. It is still under investigation,” Salas concluded.