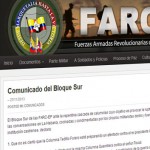 “This plot has been cooked up and seasoned in the militarist inner circle to provoke a rupture of the peace talks in Havana,” said the Teofilo Foreo Mobile column, accused of being behind the alleged assassination plot, on the FARC website.

Colombian Defense Minister Juan Carlos Pinzon announced two weeks ago that an attack had been planned by the Teofilo Foreo Mobile column against Uribe, and that the government would be taking extra measures to ensure his safety. It was reported the allegations were made based on a computer seized in an apparent government raid on a FARC camp.

The government at that time also alleged that the country’s chief prosecutor, Eduardo Montealegre, was also a target.

Following the initial revelation, President Juan Manuel Santos later admitted that the alleged plot — over which 300 policemen were deployed to protect Uribe and his family — stemmed from before taking office in August 2010.

The FARC statement flatly denied that they had plotted against either Uribe or Montealegre and called into question the veracity of the claims about another “kill-list” of senators and other prominent Colombians allegedly found on a FARC computer; a claim also denied by top generals in the Colombian army.