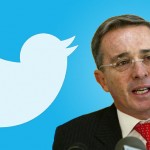 Conflicting statistics regarding not only security but various socio-economic indicators have caused a distressed buzz over social networks, spearheaded by 2014 candidate for the Senate Uribe, and doubt over the reliability of the current government.

The Twitter page of the founder of right-leaning political party Uribe Centro Democratico (UCD), along with various media and journalists, picked up on the fact that the figures tweeted by the President Santos under the tag #BalanceSeguridad and those published by impartial institutions simply did not add up.

Uribe tweeted a series of 17 reproaches labelled “Pres. Santos don’t confuse” towards the current head of state regarding national security, the economy and international relations, presenting both the figures announced by Santos and disagreeing data from official sources.

“Governments can make mistakes but they cannot lie,” Uribe tweeted on Monday.

The 17 tweets are summarized at the bottom of this article. A similar tweet by UCD defense specialist Rafael Guarin last Sunday, that was re-published on Uribe’s wall, highlighted how “either the President is lying, or the Ministry of Defense is lying.”

Uribe continued with his accusations on Tuesday, when his political party’s official site published news of further conflicting statistics from Santos’ government.

“President Santos said that the number of criminal organizations had gone down by 40%. Nonetheless, in many parts of the country this has gone up,” Uribe said to his party’s official press. “According to a report by the Ministry of Defense, in August 2013 there was a 4% reduction,” he continued, questioning how it was possible for a further 36% to occur in the last four months of 2013.

According to the article published on the party’s website, the contradicting figures with which Uribe is challenging the veracity of Santos’ declarations come from neutral information centers, including some belonging to his very government such as the Ministry of Defense, as well as País Libre and the Sergio Arboleda University.

Uribe used trumped up security figures during his two presidential terms between 2002 and 2010 when more than 3,500 civilians were executed and subsequently registered as killed members of illegal armed groups.