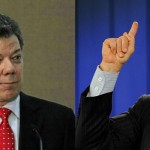 The petition was presented before the Commission of Accusation in the House of Representatives by journalist and Senate candidate Ernesto Macias of Uribe’s political party Uribe Centro Democratico.

In a conversation with BluRadio, Uribe said congress members aligned with leading coalition Unidad Naicional, were given government posts in a “carousel of reelection.”

According to the accusation, the government had given 1,968 positions and 597 contracts to to more 164 congressional allies.

The accusation is ironic as several former members of Uribe’s 2002-2006 cabinet are currently investigated for bribing congressmen into approving a 2004 constitutional amendment to allow the then-head of state to be reelected two years later.

Uribe also pointed out special payments allegedly granted by Santos to members congress that equaled $1.2 billion,.  ”We are talking about $1.2 billion that the government has given out to buy votes… that is a crime,” said Uribe.

Uribe, while making charges against Santos, had to defend himself against accusations his government had done the same. The accusations follow a well-known case where Congressman Yidis Medina admitted to having been offered money by Uribe’s administration to vote for a measure that would have changed the constitutional, allowing Uribe to seek reelection for a third term.

According to electoral watchdog NGO, in November, the ex-president had 276 pending investigations, including giving preferential contracts to political allies, leveled against him in the congressional body.

The NGO reported 1,227 investigations against top level government officials and judges in the Commission of Accusation. According the Associated Press, the commission is known for its delayed decision making and lack of condemnatory rulings.

In 90 percent of the cases in the commission, the crimes had yet to be determined, while 94 percent were still in “preliminary investigation.”

At the time of the report, Santos was under 25 investigations brought against him from various sources, including former Senator Piedad Cordoba and ex-drug trafficker and paramilitary Freddy Rendon, alias “the German,” under detention since 2006.