‘Urabeños Paid Off Rivals for Control of Illicit Mining’

Via InsightCrime/TodayColombia – Colombia’s Urabeños gang, as part of ongoing expansion, reportedly purchased gold mining operations from their rivals the Rastrojos, although this agreement was not respected by local Rastrojos members who are fighting to maintain control over this lucrative illegal industry. 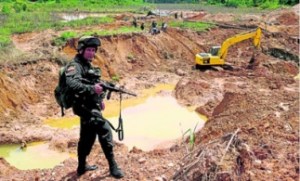 According to police intelligence sources interviewed by El Tiempo, the Urabeños paid 6 billion pesos (over $3.2 million) in December 2011 to the Rastrojos gang for control of their illegal gold mining operations in three northeastern Antioquian municipalities: Segovia, Remedios and Vegachi.

Despite the agreement, a group of local fighters in the Rastrojos, unhappy with the arrangement, splintered off and continued to operate in the area under the name “Heroes of the Northeast.”

Driving this discontent were two factors. Firstly, the mid-level Rastrojos command did not receive any of the Urabeños payment, according to El Tiempo, the haul instead being taken by the regional Rastrojos leader Erick James Prieto, alias “Medina,” who was captured in June. Secondly, the profits yielded from illegal mining operations are too great to abandon.

One miner in Segovia told El Tiempo that they must pay 4 million pesos (nearly $2,200) a month to the Heroes, while overall mining extortion by criminal gangs in the area is believe to add up to 2.5 billion pesos (over $1 million) a month, Antioquia police commander Colonel Jose Acevedo stated.

The Heroes’ refusal to give up the mining extortion rackets has led to clashes with the Urabeños, resulting in 145 deaths in Segovia alone so far this year. According to Verdad Abierta — which describes the surrounding area of Segovia and Remidios as a “time bomb” — at least 1,500 people have also been displaced from the region during 2012.

This violence shows no sign of abating, with Caracol Radio reporting last month that both sides in the war have declared their intent to assume complete control of Segovia.

As an indication of the area’s importance as a site for illegal mining, the three municipalities in question — along with a fourth, Yali — were the focus of a new anti-mining unit deployed last month that was comprised of 400 police, military and prosecutors. In this part of Antioquia, mining has overtaken drug trafficking as the principal source of income for the illegal actors.

InSight Crime Analysis
This is the second report to emerge in as many weeks of the Urabeños purchasing a stake in illicit trades from other gangs. Earlier this month, El Pais reported that the Machos drug gang sold the Urabeños access to key trafficking corridors in the Pacific province of Valle del Cauca — a key Rastrojos stronghold — last year. News that the Urabeños did the same in Antioquia reveals the power of the neo-paramilitary group — currently on the verge of becoming Colombia’s biggest drug trafficking organization — and their belief that thanks to their superior strength, they can in certain cases simply pay off rivals rather than engage in a potentially costly conflict.

The Antioquia example fits into a broader dynamic. Around the same time as the Urabeños were reported to have purchased mining operations from the rival Rastrojos, they had also negotiated a truce with their rivals in Bajo Cauca (which includes parts of Antioquia and Cordoba provinces), a region which Segovia lies on the edge of. This truce came after years of fierce fighting between the two groups and resulted in the Rastrojos withdrawing their men from the region.

However, as the rise of the Heroes of the Northeast shows, this truce has failed to extend beyond Bajo Cauca and highlights another key factor in Colombia’s criminal landscape — the breakdown of the Rastrojos. The drug gang has suffered numerous losses this year with the arrest or surrender of its three top leaders and has been placed severely on the back foot. Though the emergence of the Heroes took place before these losses, it is representative of the splintering that is now likely to take place within the group on a larger scale as former mid-level members attempt to hold on to illicit networks as their command disintegrates.

This means that despite the potential disappearance of the Rastrojos from the scene, the Urabeños’ rise to supremacy will not go unchallenged and simply buying the cooperation of rivals will not be enough in some cases, especially when the financial lure of holding onto criminal enterprises is so great.