Unrest in Colombia over possible resumption of aerial spraying of coca 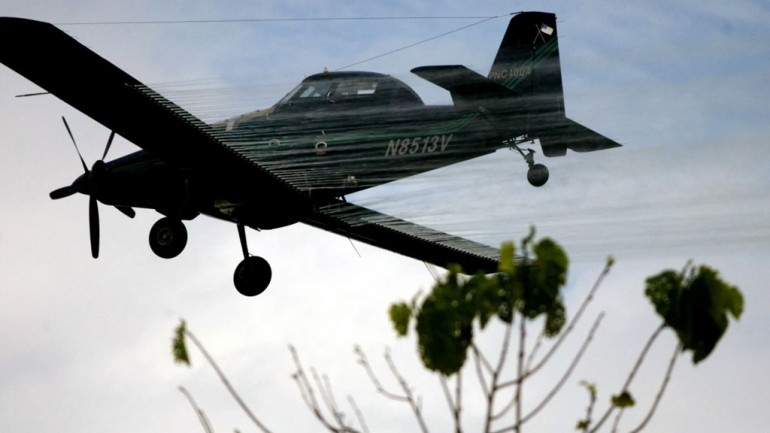 Farmers in the north of Colombia are threatening protests after reports that the government is considering the resumption of chemical aerial fumigation of coca, just months after a ban of the potentially carcinogenic pesticide glyphosate.

Initial versions rumored of a plan to restart glyphosate fumigation in August, evoking major unease in the municipalities of Tibu and Ocaña in the northern province of Norte de Santander at the end of last week.

A spokesman from the Campesino Association of Catatumbo (Ascamcat) told media that “the moment they begin the fumigation the peasant strike will begin.”

The controversial glysophate had been used for the eradication of coca through aerial spraying for years but was banned in May after a WHO report claimed it to be potentially cancer causing.

A report released in early July claiming an annual increase of coca cultivation of 44%, in conjunction with a 52% of production of the drug cocaine reportedly forced the Colombian government to consider the resumption of this practice, authorities said last week.

The possible return of glysophate immediately caused unrest in Catatumbo where many farmers depend on growing coca, claiming that decades of government abandonment gives them no other viable option to provide for their families.

W Radio reported on Thursday that 1,200 riot police and 1,200 local officers were being sent to the region of Catatumbo in preparation for an uprising from the region’s peasant farmers.

The country’s Health Minister furthermore showed his public condemnation of such an initiative calling upon the National Authority of Environmental Licenses (ANLA) to fight the proposal.

In response to the uproar the country’s Interior Minister Juan Fernando Cristo reported on his Twitter account that the practice of spraying crops was simply in discussion and denied plans to reactivate this in Catatumbo.

“The government has not yet taken a decision to spray illicit crops Catatumbo. The issue is discussed because we care about your growth,” he said.

Colombia’s General Inspector Alejandro Ordoñez then responded in horror, condemning the resumption of such practice as “an inexplicable act of inconsistency”. He made claims that in fact that Colombian government has “no clear policy on the matter” and reported this move to be an “attack” on the citizens of Catatumbo.

The district’s Ombudsman Diogenes Quintero additionally warned that a resumption of the fumigation could result in a “sharpening” of what he describes as a “humanitarian crisis” in the region.

The Interior Minister agreed to meet this Monday with representatives of Ascamcat to hear their protests, which include not only severe health risks, failed promises from the Colombian government to provide tangible crop substitution plans but also a persecution a the many who grow the coca leaf as a means to a livelihood.

Minister Cristo additionally claimed “in a few months the government will present a plan to combat illicit crops without the use of glyphosate by judicial decisions taken in this regard and have been complied with.”

“Coca cultivation is a solution for the problems of people in Catatumbo, there is no alternative. It is the regional economy which 300,000 people depend. We need a substitution plan with agricultural activities, credit, technical assistance, a secured market guarantees with supported prices ” said Cesar Jerez, the spokesman for Ascamcat in an interview with La Opinion.

“The government has breached the pacts of the Bureau of Dialogue and Agreement of Catatumbo. So we collected 12,000 signatures and we will bring them to Santos, demanding these agreements are met” Jerez reported, in particular referring to the promise of the government to provide crop substitution plans.

He furthermore stressed that these farmers are not drug traffickers and an action of such force from the government would demonstrate their “own negligence and ineptitude”.

Peasants in the village of Angalia in Tibu have additionally proposed the use of 160 hectares of land for crop substitution, they await advancements in this from the government who are yet still to fulfil their promises.

The effects of glyphosate

Revelations that the government intend to resume the practice of aerial fumigation have come allegedly as a result of a report from the UN Office on Drugs and Crime published in early July. This report claimed a 44% increase in the cultivation of coca in 2014, and a corresponding 52% increase in the production of cocaine, up to 487 tonnes. These figures follow relatively static levels in 2012 and 2013.

This increase has come despite the heavy use of the glyphosate, suggesting that the chemical is not as effective at eradicating coca plants as many were led to believe.

“The effectiveness of aerial spraying of glyphosate is much smaller than we tend to think,” said Prosecutor General Eduardo Montealegre, “the policy against drugs based on the pursuit of illicit crops has been a resounding failure, suggesting it is time to reorient the strategy” he added at the time.

Regardless, a resumption of the use of this controversial pesticide may be indicative of fears that these numbers would be potentially be far higher without this use of this highly controversial crop eradication technique.

The National Narcotics Council (CNE) in mid May outlawed the use of the chemical glyphosate in the eradication of coca through aerial fumigation. The decision came after a study published by the World Health Organization (WHO) showed that glyphosate holds dangerous quantities of carcinogens, and thus spraying it on a massive scale may put healthy people at a heightened risk of contracting cancer.

Experts from IARC concluded that exposure to glyphosate has been associated with non-hodgkin lymphoma, hemangiosarcoma, renal tubular carcinoma, skin tumors, and pancreatic adenoma.

The post Unrest in Colombia over possible resumption of aerial spraying of coca appeared first on .