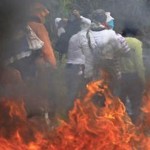 According to newspaper El Pais, more than 70 residents of the “La Inmaculada” neighborhood took over the roadway Simon Bolivar for at least three hours, claiming that the neighborhood had experienced problems with the water service since December 8.

“We are a peaceful people, it is the government who has not been paying attention… and the necessities are not being resolved,” said neighborhood resident Carlos Caicedo.

When police attempted police to clear the road, the group of protesters reportedly began throwing stones, which led the authorities to respond with tear gas.

There were no injuries reported.

The water service utility company, Hidropacífico said the lack of water was due to broken valve that affected 70% of the sector. With water trucks they will attempt to distribute water with the help of the authorities.