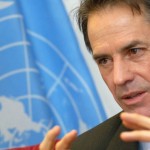 The United nations’ High Commissioner for Human Rights in Colombia said Tuesday his office has requested a meeting with the country’s Inspector General who controversially barred the mayor of capital Bogota from office for 15 years.

High Commissioner for Human Rights Todd Howland said so from the presidential palace where he met with Juan Manuel Santos to deliver a report on Colombia’s human rights situation.

Howland told press that “we have already requested a meeting with the Inspector General because it is important to talk about existing jurisprudence related to human rights in cases like this.”

According to the UN official, Inspector General Alejandro Ordoñez “is acting according to his mandate, but must also respect human rights.”

In his ruling that ousted the progressive Mayor Gustavo Petro, a political opponent of the conservative Ordoñez, the Inspector General might have violated the rights of citizens of Bogota who elected Petro in the 2010 elections, indicated Howland.

“We need to talk about the rights of the citizens of Bogota who voted for him [Petro]. It is important that the Inspector General understands there exists jurisprudence of the Political and Civil Rights Committee, and the Inter-American Court for Human Rights,” the UN representative said.

Howland said his office had requested a copy of the ruling for study.