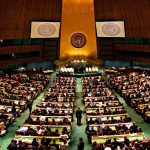 The United Nations, a key US congressman and an international court each sent statements of support to negotiators from the Colombian government and Colombia’s largest rebel group, the FARC, Wednesday, after the announcement of a new agreement in ongoing peace negotiations.

“The UN congratulates government negotiators and the FARC on the significant progress made by this agreement on political participation,” said resident coordinator and UN humanitarian in Colombia, Fabrizio Hochschild in statement.

“As a strong supporter of the peace process, I congratulate the negotiators on this achievement. It’s critical that they continue to move forward and complete a strong, just and lasting accord that will finally end 50 years of conflict and help victims and communities heal the wounds of war,” he said, in a message to Colombia Reports on Wednesday.

Meanwhile, neither the White House or the US state department made public statements on the day the agreement was signed.

“Naturally as Latin Americans, all judges of the Court hope that we will see the last remaining armed conflict in Latin America resolved after so many decades of suffering, violence and deaths.”

The Inter-American Court on Human Rights is an autonomous judicial institution based in San Jose, Costa Rica, which, according to its website, exists to “safeguards the essential rights of man in the American continent.”

Wednesday’s accord is the second of six preliminary pacts scheduled for ongoing peace talks.

The talks, which aim to bring an end to almost 50 years of violence between the FARC rebels and the Colombian state, began nearly one year ago in Havana, Cuba.