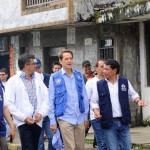 The representative of the UN High Commissioner for Human Rights in Colombia, Todd Howland, visited the city a year after first alerting authorities about a waging war between national neo-paramilitary organizations Los Urabeños and local crime syndicate La Empreza, who reportedly are supported by “Los Rastrojos,” a group that emerged from the now-defunct Norte del Valle cartel.

Having found little improvement, Howland and Colombia Ombudsman Jorge Armando Otalora called on national, state and municipal authorities to “agree to urgent measures in order to end the violence” that has displaced thousands and cost the lives of 145 since the beginning of the year.

Buenaventura is Colombia’s largest port city and located on the country’s Pacific coast. The city is considered of great importance for criminal organizations using the port for the import of contraband and the export of drugs.