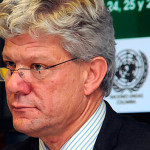 The United Nations’s representative in Colombia on Sunday called on the country’s authorities to improve its road and economic infrastructure in order to decrease the number of farmers growing coca.

According to UN representative Fabrizio Hochschild, a large number of Colombia’s coca farmers would grow other crops than the one used to make cocaine, but find the lack of road and economic infrastructure makes it hard for them to turn to mainstream agriculture.

“We hear that the people don’t want more illicit crops and are looking for an alternative, but a lot of these people live in areas where it is economically difficult to grow alternative” crops, Hochschild was quoted as saying by Caracol Radio.

“We are talking about areas where there are no roads, where the only way to get to the market place is by foot, on a horse, on a donkey or over rivers,” the UN representative said.

Additionally, the Colombian government should guarantee security for those who want to grow alternative crops to coca from possible retaliation from drug traffickers.

“In some areas, there is pressure from armed groups that persist in the crop,” said Rochschild.

One of the armed groups involved in drug trafficking, the FARC, is currently negotiating a way out of the drug trade as part of peace talks that have been ongoing since November last year.

Colombia’s countryside however is in crisis which led to widespread and violent protests earlier this year. According to the farmers, the agricultural sector is in crisis due to years long neglect by the government.