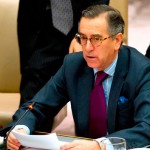 The United Kingdom plans to eliminate transit visas for Colombians who are passing through their airports on their way to other countries.

Prior to this announcement, if traveling through the UK in order to continue through to any other country, Colombians would have had to go to the British Embassy in Bogota and ask for a British transit visa.

This new change, which is hoped to be realized by the middle of the year, will allow possession of a Colombian passport to be sufficient to travel through Heathrow Airport and others to connecting flights with ease.

This news comes just weeks after the Schengen visas requirements ended for Colombians, which means that after final confirmation by the European Union, all Colombian citizens can travel without visas to 26 EU countries.

Relations between Colombia and the UK are at their “best moment” said Juan Manuel Santos on Wednesday after hearing the transit visa news.

Just one month ago, the two nations signed a security agreement to have joint training with their respective armed forces.