U.S. Commandos About to Kick Their Drug War Mission in Colombia 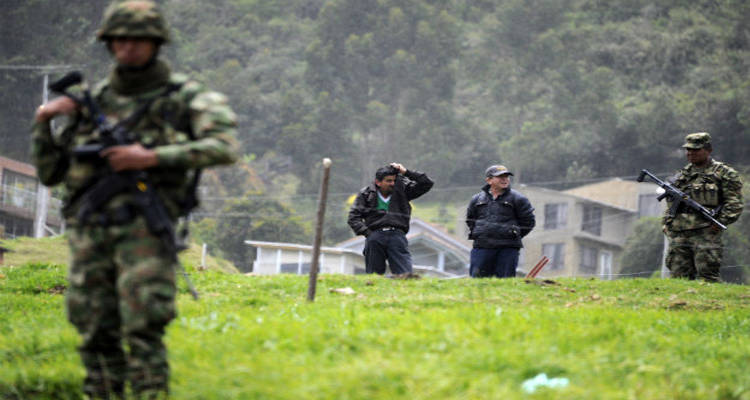 The US$8 billion United States war on drugs and instability in Colombia has pressed U.S. special operators, air crews and other personnel into a decade-plus operation to solidify security in the South American country. But the controversial mission will likely wind down soon: Colombian officials say they are winning the fight, and the two countries want to move to a new relationship based more closely on shared economic interests, said a senior U.S. administration official.

The comments came a day before Colombian President Juan Manuel Santos is expected to meet with President Obama in Washington on an official visit. The U.S.’s security assistance package for Colombia “was always designed to be phased out” as conditions on the ground improved, and “in fact it has been improving” the U.S. administration official said. Ending or revising the mission would mark a significant shift in the sometimes controversial relationship between the two countries, which has centered heavily since 1999 on curbing Colombia’s cocaine production and the violent drug lords and insurgent groups funded by them.

Colombia defense minister Juan Carlos Pinzón Bueno compared his country’s battle to attain peace to an American football game on Monday, saying Colombia is in the “red zone,” close to scoring a metaphorical touchdown against the violence that has plagued Colombia since the 1960s. But he warned the fight isn’t over yet.

“We’re in the red zone already, but we’re not [past] the goal line yet. So, we’ve got to make it there,” he said during an appearance at the Brookings Institution, an independent think tank in Washington. “We don’t want to spike the ball on the 10-yard line. That would be a terrible mistake. We really need to keep doing what we’re doing.”

If that sounds like a contradiction with the White House’s point of view, it likely all comes down to timing. U.S. Army Special Forces and other special operators are expected to continue training the Colombian security forces for the foreseeable future as part of Plan Colombia, the broad-based plan first agreed to by former President Clinton. Since 2000, the U.S. has spent about $8 billion on it, according to a November 2012 report by the Congressional Research Service. That money paid for airplanes, helicopters and development programs overseen by the Statement Department and the U.S. Agency for International Development as the Colombians rooted out notorious organizations like the Revolutionary Armed Forces of Colombia, or FARC.

Bueno cited a variety of statistics Monday while underscoring the progress in Colombia. There were about 30,000 homicides and 3,000 kidnappings there in 2000, he said, but those numbers have dropped to about 15,000 and 300 annually. At the same time, Columbia fell behind neighboring Peru as the number-one producer of coca, the main ingredient in cocaine. The defense minister said Monday he realizes the war on drugs has its critics, but said fighting it led to a reduction in funding for violent organizations, which in turn led to a reduction in violence.

U.S. special operators played no small role in that. A report released by the Center for Strategic and Budgetary Assessments in May said elite forces from all four branches of the U.S. military have deployed to Colombia since 2000, working closely with Colombian commandos.

“Aided by their U.S. counterparts, Colombian [special operations forces] have led operations that have decimated the FARC, demobilized paramilitary groups and re-established a government presence in every Colombian municipality for the first time in decades,” the report said. “… Colombia today is safer and more stable than it has been in generations.”

As of 2008, the U.S. had provided the Colombian military 72 helicopters with support services done by the U.S. Army. Conventional U.S. Navy and Marine Corps units also have participated in an interdiction program in which drugs are seized on Colombia’s coastal waters and rivers.

Plan Colombia has had its critics, however. In 2008, the GAO noted that U.S.-funded counternarcotics efforts focused primarily on the aerial spraying of crops did not reduce the production of cocaine as much as hoped, in part because farmers responded by implementing effective countermeasures that protected their plants. Human Rights organizations, including Amnesty International, also have called for the U.S. to end military aid, citing allegations of torture, abuse and killing civilians.

Bueno, Colombia’s defense minister, did not bring any of that up on Monday. He did say, however, that his country is open to exploring new relationships in which Colombia’s military train forces from other countries in Central America and the Caribbean. Any effort to do so, he said, would be “funded by your funds, but done by our experts, both on police activities and military activities.”

The post U.S. Commandos About to Kick Their Drug War Mission in Colombia appeared first on News Colombia.