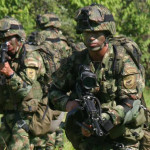 An attack by armed rebels left two soldiers dead and two wounded Monday in central Colombia. The military alleges the attacks were carried out by the country’s largest rebel group the FARC.

According to local media, the military patrol came under attack while on registration operations in rural area of Chaparral in southern part of the Tolima state.

Due to poor weather conditions, as of Monday evening, neither the bodies nor the wounded were able to be transported from the scene of the attack.

The military also reported two dead guerrillas in other confrontations with the rebels in the municipality of Planadas.