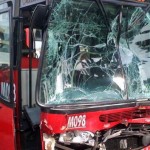 Two articulated buses collided in the Colombian capital of Bogota on Monday, injuring at least 23.

The crash on Monday morning was caused by overtaking on the dedicated busway, reported Caracol Radio. The injured have been taken to local hospitals and there appeared to be no critical injuries.

The accident took place on the intersection of the Calle 80 with the Cali Avenue.

Bogota is one of the few Latin American capital cities that has no metro. Instead, the Transmilenio bus rapid transit system carries more than 2.4 million people every day: almost one third of Bogota’s total number of inhabitants.

Traffic chaos gripped Bogota after the accident, as a section of the TransMilenio busway was shut, diverting the buses into mixed traffic lanes.

This is not the first major accident on the Transmilenio. In June this year, two separate collisions on the same day left 56 people injured.