Totó La Momposina, the great singer of Colombian traditional music, received a lifetime achievement award at the Latin Grammys last month. But the 73-year old artist said the prestigious prize belonged less to her than to the centuries-old culture and music she represents – and the generations of Colombians who created it. 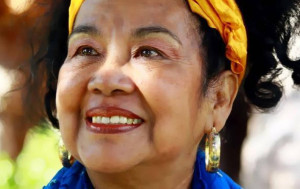 The music of identity won this prize,” Momposina said from her home in Bogota. “But at the same time this music of identity has its origins in all our ancestors. So it is a prize for all of us, for the art of all of us who believe in what ancestral music means.”

Momposina is the most famous of the Colombian cantadoras, female singers who keep traditional music and culture alive in storytelling songs. She performs Sunday at Hollywood ArtsPark, the second time that the Rhythm Foundation has presented her in South Florida. (The free show includes the Miami-based Colombian fusion group Afro Kumbe, co-founded by Locos Por Juana’s Itagui Correa, and the salsa youth dance group Imperio Juvenil, of Cali, Colombia.)

Although she has performed in world music festivals and theaters internationally since the ’80s and influenced, inspired and collaborated with famous Latin pop artists such as Carlos Vives and Calle 13, Momposina remains an obscure figure outside Colombia.

The lack of commercial recognition matters little to her.

“Pop, tropi-pop, all this kind of music comes from where?” she asks. “From the music of identity, the ancestral music that I’m doing. Where does rock ’n’ roll come from? If you look at it deeply, it comes from African music.”

In Colombia, the influence of that ancestral music extends from artists like Vives and his blend of Colombian vallenato with pop and rock to newer acts like Bomba Estereo, who mix traditional styles with electronic dance music.

More broadly, Momposina’s impact can be traced in several generations of alternative, rock and pop artists across Latin America, — from Juanes to Aterciopelados, Kinky to Café Tacuba — who from the ’90s on have drawn on their countries’ traditional music to provide inspiration and set them apart from their northern counterparts.

“Without artists like her who preserve those traditions and insist on their value and importance, all those other things would not have happened,” says music critic and curator Fernando Gonzalez, who is from Argentina (and who writes music stories for the Herald).

“I belong to a generation in Latin America who knew more of what happened in London and New York, about blues and rock, than what happened in our own backyard. It took a while for the generation that came after to realize that Latin America has its own blues, its own story, its own traditions. People like Toto were the ones who held the fort until the rest of us caught on.”

Momposina, born Sonia Bazanta Vida, takes her artistic name from her family’s home in a village on the island of Mompós, in the Magdalena River, the Mississippi of Colombia that runs from the mountainous interior to Baranquilla on the coast.

Mompós was once an important colonial trading port, where the goods, people, customs and music of indigenous Indians, African slaves and European settlers and traders all flowed. As trade and business moved elsewhere, Mompos remained undeveloped, and its traditions largely undisturbed.

“There are so many indigenous and African tribes, because the Rio Magdalena brought them all,” says Momposina. “I come from an island that has all these influences.”

Her music combines them, from cumbia to obscure styles like bullerenge and puya, along with African drums, indigenous flutes and Spanish and Colombian guitars.

She is the fourth generation to play music in her family, and says she can’t remember when she started singing – a tradition that continues. “I have 4-year old grandchildren who are being taught by their older brothers and are already writing songs,” she says.

Momposina’s powerful, gutsy voice and dynamic, charismatic performances have led some to call her the Colombian Celia Cruz. But she has a side to her artistry that the great Cuban diva did not. Momposina is a cantadora, a Colombian tradition of matriarchal women singers who preserve old songs and tales and invent new ones that comment on current goings-on. It’s a role that extends from African griots to other cultures around the Americas, one that is almost invariably played by men.

“It’s an extraordinary tradition in Colombia,” says Gonzalez. “In most of these traditions the males are the ones who keep the history. These are women. They not only maintain the music but also the stories of the community – their history, events and characters.”

Although Momposina has studied her country’s traditions formally, she says that her inspiration and style of learning is mostly informal.