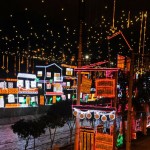 The city lights of Colombia’s urban centers cannot compare to the dramatic transformation that takes place during Christmas time, when people’s festive cheer takes the form of millions of lights in all shapes, forms and sizes.

When night falls, extravagant designs invade the streets of the the country’s big cities, giving new color to the concrete landscape. Elsewhere, historic neighborhoods come alive with a warm glow that seem to say Christmas is near.

Whichever the preference, Colombia offers festive lights for all tastes, for which we’ve selected five of the nation’s top destinations this December.

The Christmas lights of Medellin are not mere decorations, they’re stand-alone works of art. All it takes is a stroll down the streets of the center or a trip to the banks of the Medellin River to revel in the more than 27 million lights transforming the world’s most innovative city into a sensory experience worthy of a Colombian December.

Overwhelming constructions that take over the central streets of Antioquia’s capital in a sea of dazzling, beaming color that renders the most popular highways unrecognizable by night.

The 60,000 people a day that are expected to visit Medellin’s urban decorations will struggle to find more impressive sights than the 3,000 candles that appear to float above the waters of the Medellin River, the lofty tower that casts its glow across the paved stones of “La Playa” in the heart of town or the giant candle flickering against the night sky from the heights of the Cerro Nutibara.

Aptly named “Our Christmas,” this year’s Christmas decorations are characterized by immense incandescent houses, a vividly-colored homage to Antioquian architecture and practices.

And this is exactly the aim of the city’s 2013 ritual – “to hold on to tradition, strengthen values and celebrate the family” – tells the public utilities company Empresas Publicas de Medellin (EPM), which is once again responsible for lighting up the Paisan Christmas.

It is not only the official decorations that brighten the holiday season, however. Every district and every neighborhood appears to be in competition as to who can cover the most surfaces in fairy lights, adornments and gleaming ornaments. Few neighborhoods in town deny passerby a spectacle of homemade decorations or illuminated scenes representing the birth of Christ.

The exhibition includes a hologram and video mapping show, projecting the history of Antioquia on the Metropolitan Cathedral of Medellin.

The festive lights will carry on throughout the month, lasting up until Epiphany on Jan. 6, concluding the Christmas holidays.

All around the nation’s capital, the Ruta de la Navidad brings something different to celebrating Colombians and tourists alike – synchronized water, sound and light shows characterize this year’s Christmas spectacle.

A further 12 million lights awaken the city’s Christmas spirit, in a never-before-seen spectacle of exhibits and free events.

More than 500 water shows by the same organization that has graced Mexico, Chile, Brazil, and Celine Dion concerts in the past are a key feature of the scenic route.

Pools, snow machines, glowballs and a 100 meter Christmas tree have also cropped up in various places, in this multi-million dollar makeover.

“It’s not about switching on a light bulb, but about lighting up a spirit.”

Such is the motto for the Christmas lights spectacle of the emblematic city of Cartagena.

4 million LED lights illuminate streets, avenues and squares in and around the world-famous historic center, with its old city gates, balconies and churches.

6 meter high nativity scenes will tower over visitors in not one but three places scattered around town.

The “mother city” of Antioquia, known and loved for its historical and cultural value, reignites the warm glow of Christmas time.

Winner of the “Light up happiness” competition, Santa Fe’s palaces, parks, and cathedrals will be illuminated over the coming weeks. Although the embellishment of the city’s colonial architecture and a nativity scene of 200 statues won’t be the only attraction to the centenarian locality this month.

“In December, our city will get many visitors because of its 472-year anniversary since its foundation, its Cinema and Video Festival, and traditional celebrations,” Frey León Rodríguez Vargas, the mayor of Santa Fe, exlpained. http://www.epm.com.co/site/Home/Saladeprensa/Noticiasynovedades/14municipiosdeAntioquiaAlumbradoNavideño.aspx

A relatively small city compared to the urban sprawls of Bogota and Medellin, Tunja nonetheless manages to impress when it comes festive decorations.

When the capital of the Boyaca state switches on its one million lights come nightfall, a multicolored mesh illuminates the main streets, while the Hunzahua Well glows with hundreds of stars, trees and wild animals.

In addition, a folkloric festival leading up to Christmas day offers visitors another reason to get out of the big city and head to the historic city of Tunja.