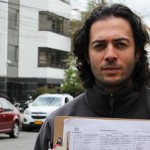 The founder of the Tomato Party has agreed to join the Liberal Party in upcoming parliamentary elections, El Espectador reported Monday.

The negotiations between the Tomato Party founder, Daniel Quintero, and the Liberal Party started over a week ago and finalized Sunday, as the two reached an agreement on issues, such as the defense of the peace process.

The initial negotiations started following the dismissal of Bogota Mayor, Gustavo Petro, and subsequent unrest on the left, claiming the country’s right-wing Inspector General took a politically motivated action against the left-leaning mayor.

According to newspaper El Espectador, in response to the unrest, the Liberal Party sent an open letter stating, “to complete a common objective, national love drives today the Liberal Party to invite all civil society organizations to be part of the National Group for the Defense of Peace. Here, the Liberal Party will open doors to team either from an academic to the political scene.”

While Quintero agreed to participate with the Liberal Party, the Tomato Party has rejected the offer, making it clear that the affiliation is solely between the founder and the party.

“Colombia is experiencing a special moment in their history, for the first time is creating a serious peace process with great potential to lead to the end of the armed conflict after 50 years of violence. To live up to this historic moment, regardless of ideological differences, we must unite around peace,” Quintero told El Espectador.