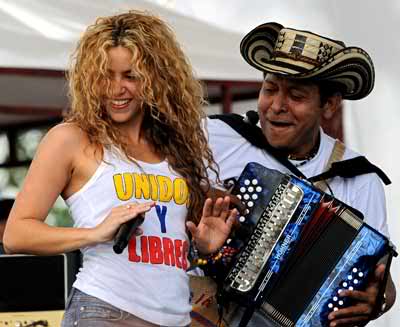 Today is Colombia’s independence day (July 20th), so we at Today Colombia want to clear up some misconceptions of Colombia.

2. Colombia is located in South America, at the top of the continent, next to Venezuela.

4. Colombia has major cities. There are shopping malls, major airports, highways, mass transit systems, tall buildings (several of the tallest buildings in the continent), traffic jams, parks,  and everything that great cities have. There are also beaches and resorts. And there is the jungle too.

5. The capital city is Bogota, the emphasis is on the a. Medellin, the second largest city in the country, is voted as the world’s most innovative. Cali, not short for California. Santiago de Cali, usually known by its short name “Cali”, is the most populous city in Southwestern Colombia, with an estimated 2,3 million residents .. .is Colombia’s third major city. Barranquilla has Shakira. Cartagena the beaches.

6. Being at the equator and in South America, most people think all of Colombia is hot. And for the part it is. But altitude can change all that. Bogota is cold by our standards, at an average of 15 Celsius (60 Fahrenheit), but not cold like New York or Toronto. If you travel around you will experience different types of climates, like Medellin’s all springlike all year around weather.

You can’t judge a country if you haven’t been there. So, visit Colombia today, see our beautiful country with your own eyes. Experience it for yourself.

But, the danger is that after you visit Colombia and see all its wonders you won’t want to leave! That’s what happened to us at Today Colombia.

So, it’s not coincidence that the country’s slogan is “the only risk is you want to stay” because that happens quite often.