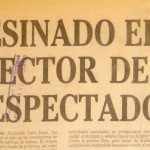 December 17, 1986: a voice is silenced. Machine gun fire shatters the stillness of the cold Bogota night. Motorcycle tires rip the pavement, leaving wisps of smoke in its wake. The director of newspaper El Espectador, Guillermo Cano, slumps over in his car, eyes unfocused, as the pools of blood darken around his motionless body.

Cano’s story serves as a reference point for journalists working in Colombia. The journalist and editor was shot down after using his respected position in Colombia’s oldest newspaper to denounce the corrupting influence of drug traffickers in the country’s political circles. The “transgression” cost him his life.

In war, truth is a dangerous concept. Colombia has been at war for over 50 years, and in this environment, practicing truth in journalism is, and always has been, dangerous.

In a functioning democracy, the press serves primarily to maintain integrity in politics, hold checks on corruption, and ensure the practice of human rights.

Of the murdered journalists, justice has not been served in 36 of the cases, as the killers remain unknown.

CPJ Senior Americas Program Coordinator Carlos Lauria told Colombia Reports that violence, and threats of violence, lead to a “repression” of journalism through a culture of “self censorship” in Colombia.

In a high profile example of violence directed at journalists this year, top editor and investigative journalist, Ricardo Calderon, working for weekly Semana, barely escaped death after diving into a ditch as hired hit men shot up his car while he was stopped at a red light. Calderon was targeted after reporting on lavish jail conditions for convicted human rights abusers in the military.

The Colombian government, recognizing the high level of threats to journalism in the country, passed a law in 2000, forming the Program to Protect Journalists. While the journalist protection program has been successful in dropping the murder rate of journalists, threats of violence  remain a serious issue, with 91 Colombian journalists victimized by threats in 2012, according to Colombian press watch group, Foundation for Freedom of the Press (FLIP).

According to FLIP legal coordinator Emmanuel Vargas, the program – which was used as a model for a similar program in Mexico – has facilitated liberty for the press, although there are still many difficulties to consistent implementation.

According to newspaper El Tiempo, there were 12 journalists murdered in 2000, the year the law was implemented, whereas last year in 2012 there was only one. However, FLIP is still documenting between 90 and 100 threats per year, of which not one has resulted in a conviction since FLIP started taking records in 2006.

Vargas said the problem stems from the lack of  judicial investigation of those responsible for threatening journalists, which allows “those interested in silencing the press” to “create mechanisms for censure through methods such as indirect pressure.”

The uncoordinated nature of politics in Colombia and the multitude of illegal armed groups engaged in conflict and illicit activities, are the main reasons for Colombia’s continued struggle with threats against journalists, according to Vargas. Today the threats are more targeted towards local reporters, who are pressured to remain silent on criminal undertakings taking place in their local jurisdiction.

“One must keep in mind that Colombia is highly regional country, with high rates of violence connected to economic and political activity,” said Vargas. “Those factors require a silent press.”

Vargas said a reassessment of protections for journalist would happen if, and only if, “an understanding arises” in Colombia, “valuing the press’s role in maintaining democracy.”