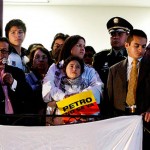 Just hours after the Inspector General’s Office dismissed Bogota mayor Gustavo Petro for “irregularities” in trash collection, he told a crowd of thousands in the heart of Colombia’s capital that they were the start of a “peaceful revolution.”

In front of thousands of supporters in Plaza Bolivar in central Bogota, Petro gave an impassioned speech in which he denounced his dismissal over “irregularities” during the transfer of the city’s waste collection; protested being barred from office for 15 years; and called on his supporters to send a message to Colombian President Juan Manuel Santos.

“Let the President know. He is the one who has to decide ultimately whether to endorse the decision of the Inspector General or is able to prevent this arbitrary order which breaks the Constitution. Now we will know if the president is for  peace or simply re-election,” Petro said on Monday night.

“I will go where you tell me. If we’re going to get where we want, that is, peace and democracy, we know what we have to do in the coming days. This is Colombia’s Tahir square. This should begin a democratic and peaceful revolution. A revolution of hearts and brains.

Not the first mayor to be dismissed

Despite Petro’s claim, Article 278 of the Colombian Constitution gives the Inspector General the ability to charge a public official who manifestly violates the Constitution or the law.

In his first term, Inspector General Alejandro Ordoñez sanctioned 828 mayors, 622 councilors and 49 governors, according to Colombia’s Semana newspaper. This means on average each week he dismissed four mayors across Colombia.

In October, Petro had presented a letter to the Inter-American Commission of Human Rights, bringing a lawsuit against Ordoñez for alleged inhumane treatment and political rights violations, asking the court to force a dismissal of the charges he was facing.

After Petro’s speech, about 150 people decided to heed his call and camped out in front of the Supreme Court and Congress, RCN radio reported Tuesday morning.

With representation from many social and cultural groups, the vigil included improvised tents and a fire.

Another protest was expected for Tuesday afternoon at 4pm Bogota time.