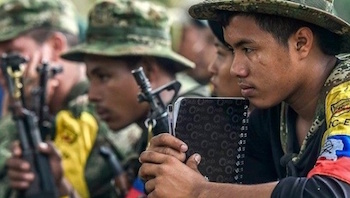 TODAY COLOMBIA – A UN verification mission is expected to play a vital role in an expected cease-fire between the FARC and the Government of Colombia. Adam Isacson, the Washington Office on Latin America’s senior associate for regional security, examines what form the United Nation’s presence is likely to take.

Colombia’s government and the guerrillas of the Revolutionary Armed Forces of Colombia (Fuerzas Armadas Revolucionarias de Colombia – FARC) are expected to soon reach a bilateral cessation of hostilities that would involve guerrilla fighters beginning to concentrate themselves into special demilitarized zones around the country.

This article is part of a series on Colombia’s peace process by the Washington Office on Latin America (WOLA) and has been reprinted with permission. Its views do not necessarily reflect those of InSight Crime. See original article here.

Within 30 days of signing this agreement, according to a January 25 Security Council resolution, details should be worked out for a UN mission to Colombia to verify the cease-fire. We don’t yet know what that mission’s name will be, but we know the following.

The UN mission needs to “hit the ground running.” Yet the mission is unlikely to be ready to operate at the moment a ceasefire is signed.

It will be charged with monitoring and verifying the FARC‘s “laying down of arms.” The guerrillas will not be handing over weapons to Colombia’s government. This would be seen as symbol of surrender. Any such proposal would run contrary to the spirit of the negotiations, and would have been rejected by the FARC. In addition, recent Colombian history leads FARC members to worry about their own protection after they demobilize. As a result, disarmament will happen slowly (as it did in Northern Ireland), and will be the responsibility of the UN mission.

The UN will be part of a “tripartite mechanism” to verify the cessation of hostilities, along with Colombia’s government and the FARC. The UN mission will be present near the as-yet-undetermined guerrilla concentration zones, which most likely will be guarded by Colombian military personnel. The mission will have full access to these zones. There, it will play a sort of “referee” role. Along with government and guerrilla representatives, the mission’s members will deploy quickly to investigate any claims that one side has violated the terms of the ceasefire, or that such a violation appears imminent. The tripartite body will have to decide whether a violation happened, report it, and recommend steps that must be taken to avoid a repeat.

Officials interviewed by WOLA colloquially described the tripartite model as “three people in a jeep”: investigator teams with representatives from the FARC, the Colombian military, and the UN mission. (The teams are actually more likely to be made up of six, not three, people.)

Its personnel will come from around the world, though the Security Council resolution “looks forward to the contributions of Member States of the Community of Latin American and Caribbean States (CELAC), a body of all Western Hemisphere countries except the United States and Canada. However, according to UN custom, countries that share a border with Colombia (Brazil, Ecuador, Panama, Peru, Venezuela, and — due to a maritime border — Nicaragua) cannot participate. There may be some flexibility on this custom, though, as these neighboring countries plus Colombia comprise more than half of the combined population of CELAC member states.

The UN mission will be headquartered in Bogotá, but will have satellite offices in seven or eight other regions. It will be important for the tripartite teams charged with investigating ceasefire violations to be forward-deployed as often as possible, well outside the large cities where the mission’s regional headquarters will be located, and closer to the remote sites where verification is likely to be necessary.

The mission’s mandate will last for 12 months, but may be extended if both the government and the FARC request an extension.

The head of the mission will be Jean Arnault, the French diplomat who directed the MINUGUA mission in post-conflict Guatemala between 1997 and 2000.

It is expected to report to the UN Secretary General every 90 days about ceasefire compliance, but it would be a significant improvement if the mission’s public reporting could be even more frequent than that, especially during the fast-moving period when concentration zones are being established, confidence is being built, and would-be spoilers may be poised to commit violent acts. The formal 90-day reports will also be crucial documents telling us much about the stability of the ceasefire, and it is vitally important that neither the government nor the FARC have formal or informal veto power over their content. Recommendations that emerge from the mission’s investigations into alleged or potential ceasefire violations must also be a matter of public record.

It is charged only with monitoring/verifying the ceasefire and disarmament, not any of the other peace accords. Eventually, the Colombian government and the FARC will reach final accords committing both sides to significant reforms to rural development policy, political participation for the opposition, reducing production of illicit crops, transitional justice, and assistance to victims.

These other accords are outside the UN mission’s purview. But they can’t go forward without independent verification. If either side fails to comply with commitments on these larger accords, the post-conflict process could be set back deeply, even fatally. For instance, the FARC may allege that the government is not honoring its commitments to help coca-growing communities, while the government may claim that ex-FARC members are participating in the drug trade in those communities. Colombia will need some international arbiter — perhaps the UN, perhaps the OAS or a conglomeration of foreign states — to verify allegations of non-compliance with these broader commitments.

The UN mission needs to “hit the ground running.” Yet the mission is unlikely to be ready to operate at the moment a ceasefire is signed: Arnault, the mission head, and advance teams have only recently begun the labor-intensive work of finding and establishing a central office and satellite offices, procuring equipment, requesting personnel from UN member states, and hiring staff. Meanwhile, the concentration zones themselves won’t be demarcated and prepared for some time after they are agreed. For weeks or months after the signing of a ceasefire, then, the government and guerrillas will be operating without geographic concentration and without verification.

This situation may resemble the de facto ceasefire that exists now, in which attacks and combat have all but stopped, but reports continue about activities like extortion, intimidation, and illegal economic activity. In the eyes of Colombian public opinion, the credibility of the process will hinge on a true reduction in non-combat hostilities during this uncertain period. The faster the UN mission can establish itself, the more credible the process will be.

*This article is part of a series on Colombia’s peace process by the Washington Office on Latin Americarica (WOLA) and has been reprinted with permission. Its views do not necessarily reflect those of InSight Crime. See original article here.