The Staggering Toll Of An Anniversary Colombia Would Rather Forget 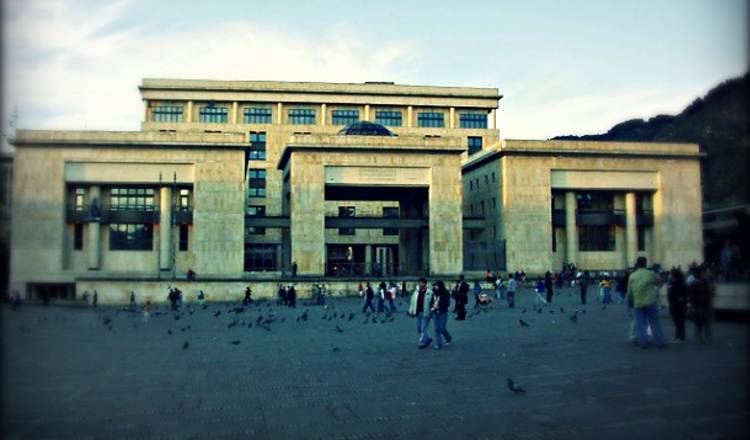 (WORLD CRUNCH) BOGOTA — Twenty-eight years to the day after one of Colombia’s worst tragedies — a politically-inspired bloodbath between leftist guerrillas and the government — the country has yet to fully reckon with the two-day assault that has become a neverending financial burden, for damages incurred and compensations claimed, that has been draining the public purse for nearly three decades.

It was Nov. 7, 1985, when Colombian soldiers stormed the seat of the Supreme Court in Bogotá to recover the building from rebels. A day before, the Palace of Justice had been taken over by 35 members of the M-19, a leftist guerrilla force formed in the 1970s that demanded a trial for then-President Belisario Betancur. They accused the president of interrupting a tentative peace process between the state and the M-19. They took 300 jurists and judges hostage, and Betancur decided to let the army handle the situation. Troops stormed the Palace, and more than 100 people died, including some guerrillas and many magistrates they had taken hostage. Eleven people were declared missing.

No authority has an exact account of the costs to Colombia to date, but estimates place it around $525 million. This includes the cost of the court’s reconstruction, compensation payments, and the cost to the judiciary of various cases —and now that of defending the State before international bodies. The bill may yet increase.

The Inter-American Court Of Human Rights is currently processing a victims’ claim worth more than $26 million, and there will be more costs if investigations ordered to ascertain the possible responsibilities of uniformed agents and certain ministers working then in fact proceed.

Reconstruction and other costs

The biggest expense linked to the assault so far has been the rebuilding of the Palace of Justice between 1986 and 1999. Experts have suggested a reconstruction cost equivalent in today’s dollars of over $263 million — excluding rents paid or furniture bought in those years to allow the higher courts to keep working.

With rulings that began to be issued in the mid-1990s, an arbitration body called the State Council determined that the Colombian government was administratively responsible for the massacre, in part for failing to protect its magistrates. And while fewer than half the 100 families affected by the tragedy have taken the State to court, the ones who have have generally been successful.

Analyst Alfredo Rangel counts 45 sentences issued against the government, with more than 100 people receiving an average compensation of 1,000 grams of gold for moral damages. Various sums have been paid for material damages incurred. The relatives of one judge killed in the assault, for example, received the equivalent of $525,000.

Then there have been the costs of military court proceedings dealing with disciplinary or criminal offenses, and the money spent on teams of experts hired to discover the truth, in vain.

Official contracts show the State has so far spent more than $789,000 since relatives of those missing after the assault took their cases to international courts. A big chunk of the money has gone to lawyers, the first of whom, Jorge Enrique Ibáñez Najar, signed two contracts in 2008 and 2010 worth more than $110,000.

He was the country’s defense attorney in May last year when Colombia was notified that the case would be referred to the Inter-American Court of Human Rights. He resigned three months later, and five days before the deadline for responding to the notice from the court, Colombia hired Rafael Nieto Loaiza, whose contract cost more than $213,000. Nieto’s answer to the court failed to acknowledge those who were missing after the two-day assault, a move that proved disastrous.

The State had to liquidate his contract, then hired an advisory committee of six lawyers, paying each of them a little under $23,000 for a month’s work. They had to decide whether it was advisable for the government to accept responsibility for the missing, for which they charged over $135,000. Accepting their opinion, the Colombia Defense Agency chose Julio Andrés Sampedro Arrubia, a committee member, as the new defense attorney. He signed a contract for almost $86,000, while a substitute defense attorney also hired was paid the same sum. Legal fees since the country was notified about the international court proceedings total $631,000.

It doesn’t look like this tap will stop leaking any time soon. Criminal lawsuits over the missing are proceeding, state prosecutors want to dig up the past to uncover officials’ presumed responsibility, and more relatives are set to sue the State. To cap it off, officials predict condemnation by the international court is imminent.

About this article source Website: http://www.elespectador.com/
The oldest newspaper in Colombia, El Espectador was founded in 1887. The national daily newspaper has historically taken a firm stance against drug trafficking and in defense of freedom of the press. In 1986, the director of El Espectador was assassinated by gunmen hired by Pablo Escobar. The majority share-holder of the paper is Julio Mario Santo Domingo, a Colombian businessman named by Forbes magazine as one of the wealthiest men in the world in 2011.