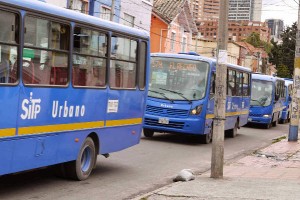 Mike’s Bogota Blog – Bogotá’s SITP (Integrated System of Public Transit) was supposed to be the city’s traffic saviour. Those blue buses would drive carefully, stop only at designation stations, not pollute and, most importantly, replace and eliminate those old, polluting, traditional buses.

But things don’t seem to be working out that way.

But, as some of us have observed, many of the SITP buses are just as polluting as the traditional buses.

The SITP buses do restrict themselves to only picking up passengers at buses. But I have often seen SITPs blowing past red lights at intersections.

And just the other day, Bogotá transit officials announced that the complete SITP system would not be operating early next year after all.

Add to all this the fact that the SITPs usually carry few or no possengers. Perhaps that’s why some of the small urban bus companies announced recently that they’ll drop their participation in the system.

What does this all mean? For starters, that governments are usually incompetent at running businesses.

What else does it mean? That Bogotá will be cursed for a long time yet with chaotic, ancient and highly polluting buses.

The post The Sickly SITP appeared first on News Colombia.