TODAY COLOMBIA – InSight Crime takes a closer look at shifts in coca cultivation trends in 19 of Colombia’s departments based on the most recent US estimates, shedding light on the different dynamics on the ground as the country’s cocaine production hits a historic high.

New US government figures obtained by InSight Crime place Colombia’s embattled Pacific department of Nariño as the number one coca crop cultivator in all of Colombia, taking over the top spot from the department of Norte de Santander on the Venezuelan border.

Nariño, which was the third-largest cultivator in 2015, saw a 52 percent increase in estimated coca hectares in 2016 to a total of 39,500 hectares. This represents 21 percent of the national total, which itself increased by almost a fifth in 2016 to over 188,000 hectares.

The top cocaine producer in 2016, however, is Cauca, Nariño’s neighbour on the Pacific coast. Together, these two Pacific departments alone produced an estimated 300 metric tons of cocaine, or over 40 percent of the national total. 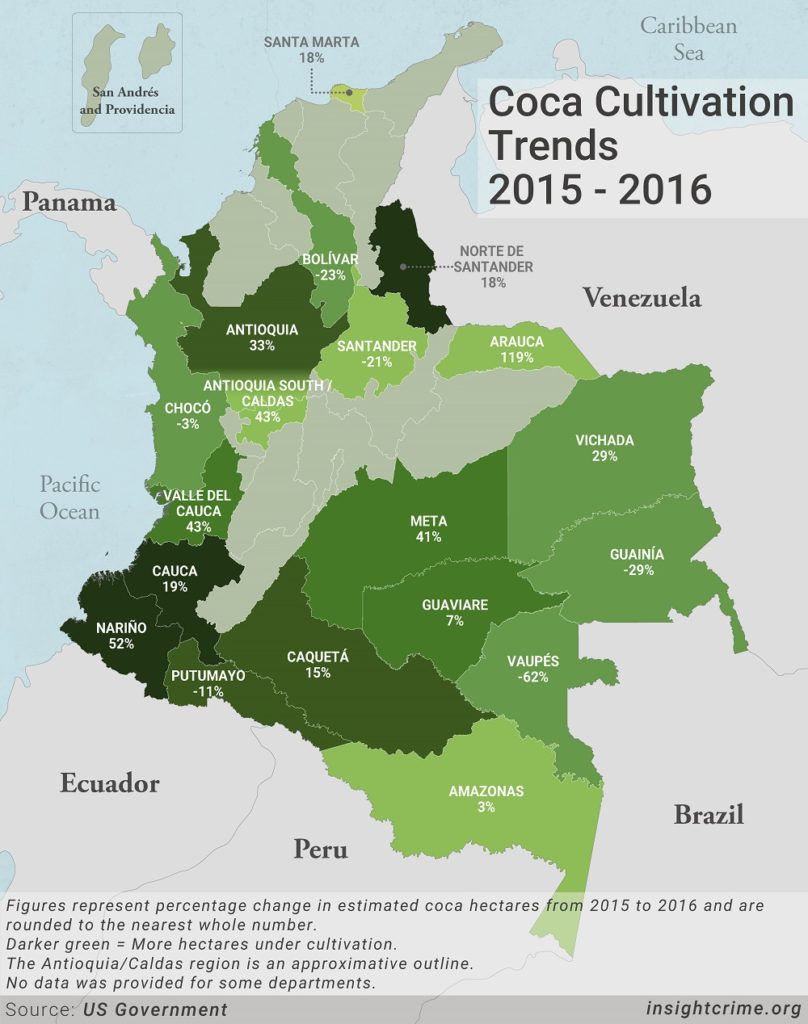 This historic peak in Colombia’s cocaine trade has responded to the individual realities of the country’s diverse regions. But this development will pose similar obstacles to building peace on the ground as the nation transitions into a new phase of its decades-long armed conflict.

The past year has seen Colombia’s top coca-producing department, Nariño, plunge into an all-out battle over its extremely valuable drug real estate. Aside from its abundant coca fields, the region’s intricate network of rivers, hundreds of drug production laboratories and long stretch of Pacific coastline contribute to its role as a launch pad for drugs heading to the United States.

These factors have made Nariño prize territory for criminal groups looking to expand their influence and earnings. While for years this area and its criminal economies were under the tight control of the Revolutionary Armed Forces of Colombia (Fuerzas Armadas Revolucionarias de Colombia – FARC), the withdrawal of the rebels following the signing of a historic peace deal with the Colombian government has left much of this strategic turf up for grabs. Powerful national organizations as well as newer groups, some of which have defected from the FARC, are now taking advantage of the guerrillas’ demobilization to take power.

One of the factors pushing up coca production in places like Nariño and neighboring Cauca is that criminal actors have been pressuring coca farmers to plant more crops. In the case of the FARC, it has been speculated that the guerrillas encouraged ramping up cultivation in order to accumulate funds in anticipation of their eventual demobilization.

A steep drop in both aerial and manual eradication nationwide — from a peak of 230,000 hectares in 2008 to less than 18,000 hectares in 2016 — has also reduced the perceived risk by farmers, increasing the incentive to grow.

Another crucial issue facilitating drug proliferation in places like Nariño and Cauca is the fact that a huge amount of crops are located in protected territories such as indigenous reserves. Here, forced eradication is harder as authorities face a greater number of obstacles to operate.

One region with many attractive characteristics for drug trafficking that surprisingly has not seen coca production surge as much as in other departments is Valle del Cauca.

Also on the Pacific, it has similar qualities as Nariño and is home to one of the busiest ports in the country. That Valle has not seen an explosion in coca could be at least partly explained by the fact that the area where most of the drug crop is concentrated — Buenaventura municipality — has not been prioritized for “post-conflict” development projects. These will aim to create new economic opportunities in places historically affected by the conflict, and it has been suggested that armed groups have been encouraging farmers to plant more coca in order to receive such benefits. Yet, in the absence of such promises, this is less likely to be a factor.

In Chocó, the control of armed actors in rural communities has perhaps had a more inhibitory effect on the coca industry, and cultivation estimates decreased slightly in 2016 despite a 44 percent rise the year before. Parts of this department are currently in the grip of a heavy dispute between illegal groups looking to expand. This has possibly destabilized the drug trade enough to halt a growth in crop farming, the seeds for which are often provided by the local armed actors themselves.

As InSight Crime has noted, Colombia’s Pacific coast may be gaining importance in the international drug trade, a trend that will likely be fuelled by the overall growth in coca production.

A somewhat different trend can be seen in Antioquia, where coca dynamics have been closely linked to the gold industry. The region saw many coca farmers turn to mining as international gold prices soared after 2008, while the state focused more on battling the illegal drug trade. Now, the process has been reversed, with the region seeing an increasingly steep rise in coca since the gold market plummeted in value and the state began an intense crack down on informal mining.

Another area to keep an eye on is the Eastern Plains, which include the Meta, Arauca, Casanare and Vichada departments, all of which saw big increases in estimated coca production, according to the United States. In contrast, 2015 data from the United Nations — which is used by the Colombian government — shows that this region has experienced a significant downward trend in cultivations over the past several years. The Urabeños organization appears to be making a greater push into this coveted drug trafficking hub, which is home to several criminal networks.

It should be noted that the US estimates appear to contain some discrepancies. Cauca, for example, produces more cocaine than other departments with more coca crops, while Putumayo saw estimated cocaine production increase despite a drop in coca cultivations in the same year, according to the US data.

One possible reason for this is the differing levels of crop maturity in each region. Plants produce more cocaine when they have more time to grow. Thus it is possible that the US figures were adjusted to account for this. The United States may be also taking into account techniques implemented by drug producers to boost the cocaine yield of coca leaves.

Indeed, Colombian criminals have become so adept at optimizing productivity that they may even be sharing such strategies with other Andean countries.

Article originally appeared on Insightcrime.org and is repubished here with permission.