The Fate of David Ravelo. Peace Prospects in Barrancabermeja, Colombia 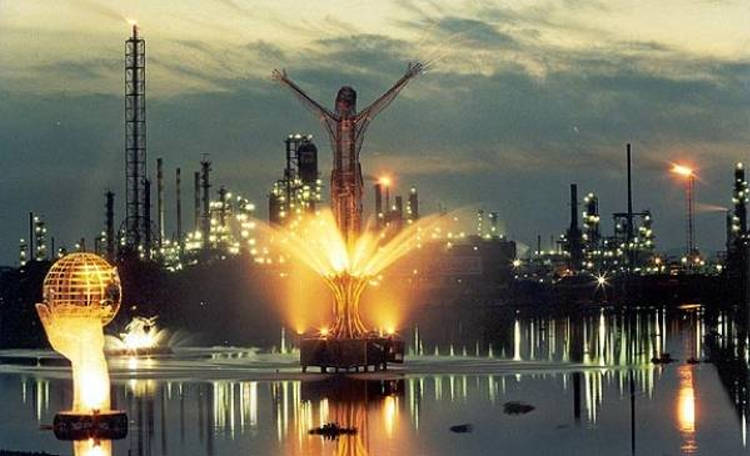 By W.T. WHITNEY Jr. -Negotiations between the Colombian government and the Revolutionary Armed Forces of Colombia (FARC) to end fifty years of war have been ongoing in Cuba for a year. Agreements on agrarian rights and recently political participation have boosted peace hopes. But whatever the outcome of negotiations, chances for peace rest largely on what happens in cities and regions like Barrancabermeja.

The road there is uphill, as evidenced by the fate of political prisoner David Ravelo and violence directed against CREDHOS, the Barrancabermeja human rights group Ravelo founded and led. A mainly U.S. solidarity delegation visited with Ravelo in Bogota’s Picota prison in late 2012, and also called at CREDHOS headquarters in Barrancabermeja. The present writer joined that delegation. This communication serves as follow-up to the visit.

Barrancebermeja, population 230,000, is situated on the long, commercialized Magdalena River. Colombia’s largest oil refinery is there, and the region’s history is replete with oil – industry strikes. By 1987 when Credhos (Regional Corporation for Defense of Human Rights) was founded, paramilitaries were on the way to subjecting Barrancabermeja to a reign of terror. David Ravelo and Credhos resisted.

Credhos secretary-general David Ravelo told an interviewer in 2010 that, “There are many murders and forced disappearances in Barrancabermeja and in the Magdalena region. Credhos accompanies victims’ families who are seeking the truth and damages for harm that was done. We demand reparations on their behalf and justice that is their due.”

Credhos’ formation coincided with repression carried out against the newly formed Patriotic Union (UP). That electoral coalition emerged from an agreement between the government and FARC whereby insurgents would give up arms in return for being able to join others in building a left political movement. U. P. activist David Ravelo gained a seat on the Barrancabermeja city council. Then amidst murders, arbitrary arrests, and disappearances, he went to jail for two years on fabricated charges.

Some 20 years later, violence was continuing. Credhos reported that in Barrancabermeja during the first two months of 2013, there were “five murders, three forced disappearances, two people wounded, and 20 death threats.” Blame fell on paramilitaries intent upon “maintaining social and political control of the city’s poor districts and thus sustain drug trafficking, a lucrative business through which they finance their criminal action.” Human rights defenders and members of a women’s political group endured “fear, anguish, intimidation, and instability.” Credhos activists were being tracked and spied upon.

David Ravelo was in prison again. Detained on September 14, 2010, he learned in December, 2012 that he would remain there for 18 years.

During April, assailants killed nine individuals in the city, among them Gilberto Arguello, president of the Board of Community Action. In early May citizen Giovani Polo Gómez was being killed in one barrio at the time Rafael Rodríguez, secretary general of the USO oil workers union, evaded an assault in another.

In November Credhos secretary general Abelardo Sánchez, the target of repeated death threats, came under attack as did Credhos president Ivan Madero Vergel. By hiding upstairs, the latter avoided discovery by a man who forcibly entered his building. As the month ended, guards stymied an attack on Credhos headquarters by three men suspected of being paramilitaries.

Prosecutors charged Ravelo with complicity in the 1991 murder of a Barrancabermeja city official. At Ravelo’s trial, the prosecution relied upon accusations from two jailed paramilitary chieftains, once active in Barrancabermeja, who gained reduced sentences in return for their testimony. One of them, Mario Jaimes Mejía, testified he had ordered Ravelo’s assassination. The accusers allegedly bribed a corroborating witness. The judge at Ravelo’s trial in early 2012 refused to hear testimony from 30 defense witnesses.

Ravelo’s appeal centered on the criminal behavior of his prosecutor who as a police lieutenant took part in 1991 in the forced disappearance of a man named Guillermo Hurtado. William Pacheco, not yet a prosecutor, spent a year in a military prison for the crime. Colombian law bans criminals from serving as prosecutor. Pacheco entered his resignation early in 2013, but remains on the job.

Reacting to the judicial persecution of one of its leaders and having known chaos and murder in its own city, Credhos has lessons for Colombians as to difficulties in store for them as they try to build peace with social justice. In its analysis of the David Ravelo case, Credhos holds that “at the highest levels of the Colombian state they want to weaken social protest.” And, “there are hundreds of cases in which they have opened criminal investigations for daring to defend and promote human rights as a fundamental principle of a society dedicated to human development and defense of vulnerable communities.” As to the Colombian state: “experience has shown us that [its] strategies are structural and systematic.”

That insight speaks to North Americans who would confront the war-making U.S. state. Colombia of course is not only Latin America’s prime U.S. military ally – host of a network of U. S. military bases – but also is the recipient of military aid funds well known to trickle down to the benefit of paramilitaries and other lawless characters.