The battle over bullfighting in Colombia

(BBC) Colombia’s Constitutional Court will decide on Thursday whether to reopen Bogota’s famous bullfighting ring. In the lead up to the decision, the issue has been raging on social media. 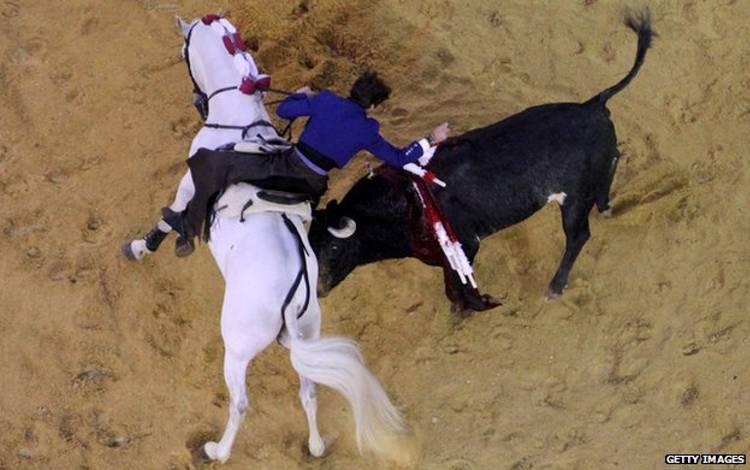 Colombians love social media. Anyone who’s anyone in the world of politics, sport or celebrity in Colombia uses Twitter. And bullfighting is one of the hottest issues at the moment, says Camilo Andres Garcia, a journalist, high-profile Twitter user and social media commentator in Bogota, who is opposed to bullfighting. It’s the blood when the bull dies that many Colombians find hard to deal with. There has been enough human blood shed during the country’s decades-long conflict, he says.

Bullfighting is associated with the elite in Colombia – and conjures up images of rich ranch owners and women in hats and fancy dresses. There are many high profile supporters of bullfighters – including a number of Colombian newspapers – but on social media, they appear to be losing the PR battle.

There are two rival hashtags doing the rounds on Twitter in Colombia ahead of this court decision, #LasCorridasNOVuelvenABogota – bullfighting won’t return to Bogota – and #VuelvenlosTorosaBogota – the bulls are coming back to Bogota. The anti-crowd’s voice is far louder though (12,000 tweets on their hashtag, versus fewer than 200 on the pro-side at the time of writing).

“It’s a very important decision for our family,” says Diana Carolina Baquero Hernandez, a journalist and bullfighting radio host. Her family’s history is bound up with Bogota’s bullfighting ring, Plaza la Santamaria. Her father’s uncle was once the manager, and many of her relatives were born and grew up inside the stadium. “Bullfighting is our life, our passion, our tradition,” she says.

Baquero-Hernandez has set up a Facebook page in support of bullfighting, but it’s small-scale, and she admits her side is being drowned out. She says many who criticise bullfighting are ill-informed. “I feel angry sometimes because I feel people don’t understand the real meaning of bullfighting. Bullfighting is an art.”

The post The battle over bullfighting in Colombia appeared first on Colombia News | QColombia.com.