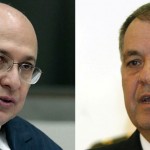 Colombia’s Prosecutor General on Thursday lashed out at the country’s Inspector General who had said rulings by the Inter-American Commission for Human Rights are not binding.

The difference in opinion regarding the IACHR’s authority in Colombia became a hot topic last month as Bogota Mayor Gustavo Petro appealed his dismissal and barring from office from 15 years at the OAS human rights court.

On Monday, Inspector General Alejandro Ordoñez had said that abiding a ruling by the international court is optional. According to the IG, IAHCR sentences are “not binding” as “the IAHCR can’t dictate any state.”

Ordoñez made his remarks as the IAHCR is investigating his controversial decision to remove Petro for office over problems that occurred during the mayor’s attempt to bring the capital’s trash collection under state control. Petro appealed the decision before the international court because he feels he is the victim of a political persecution and Ordoñez willingly violated his right to be elected and the people’s right to vote.

Prosecutor General Eduardo Montealegre had earlier criticized Ordoñez handling in the Petro case and openly questioned whether the Inspector General had acted within the boundaries of the law in his removal from office of an elected official.

Regarding the IACHR’s authority, Montealegre failed to mention Ordoñez when saying on Thursday that “while in the country there are high authorities that want to ignore rulings of the Inter-American Human Rights System, we at the Prosecutor General’s Office, on the contrary, are institutionalizing … the entire discourse of human rights protection which consolidated the jurisprudence of the Inter-American system and the International Criminal Court.”

Petro is allowed to continue his functions as mayor while a regional court studies a civilian lawsuit against the Inspector General’s decision.