Support for Santos in Colombia on the rebound: Survey 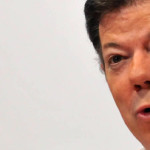 Colombia President Juan Manuel Santos has seen his approval rating rise from 29% to 38% in last two months although he is still perceived negatively by more than half of the country’s population, according to a national survey.

The survey carried out by the Gallup Colombia asked people in Colombia’s five major cities of Bogota, Medellin, Cali, Barranquilla and Bucaramanga about their opinion concerning different political, economic and social topics.

The figures, released on Thursday revealed that the percentage of Colombians approving the president has risen from 29% in October to 38% in December. Still, the figure of disapproval remains higher with 55%, but was reduced by 8% since October.

This indicates a positive trend for Santos since this year’s summer when his approval rates were down due to the negative perception of his handling of the national agrarian strikes.

According to the survey, this positive trend partly stems from the growing support for the peace process between the government and Colombia’s oldest rebel group FARC which has risen from 56% to 62% in the last two months.

Still, 71% of the survey pollees disapproved the rise of living costs under President Santos and 80% were not satisfied with his health policies.

Generally the pollees’ attitude towards the country’s economic development has changed significantly over the last two months, with 45% saying that they are feeling optimistic about the economic situation compared to 33% in October.

On the other hand, 82% are not satisfied with the president’s handling of the general security situation of the country, while about 77% share a negative perception of the justice system and 76% think negative about political parties.

The post Support for Santos in Colombia on the rebound: Survey appeared first on Colombia News | Colombia Reports.