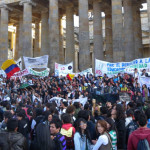 The majority of students protesting in Plaza de Bolivar, Bogota’s central square, belong to the District University of Bogota and seeking to eradicate what they claim as corruption that has “presented itself” in the institution, Caracol Radio reported.

Additionally, 200 people marched on carrera Septima, another of the main arteries traversing the capital, causing the partial closure of the Museum of Gold (Museo de Oro) station of Bogota’s Transmilenio mass transit system.

The student protests are adding to the ongoing nationwide agrarian strikes which resulted in recent violent clashes between the riot police and farmers in the southwestern part of Colombia.